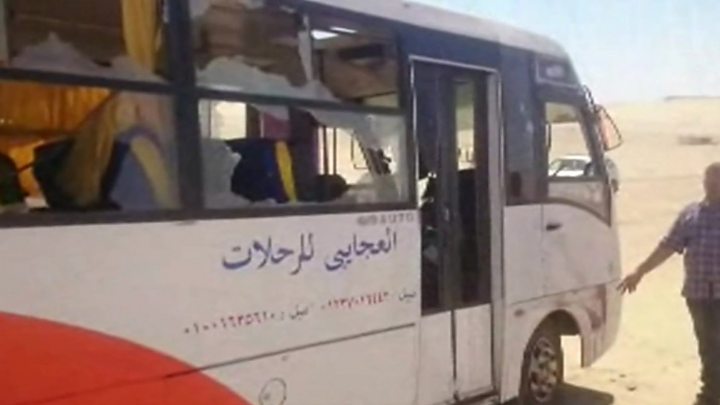 Gunmen have attacked a bus carrying Coptic Christians in central Egypt, killing at least 28 people and wounding 25 others, officials say.

The bus was travelling to the Monastery of St Samuel the Confessor, 135km (85 miles) south of Cairo, from Minya province when it came under fire.

No group immediately said it was behind the attack.

But Islamic State (IS) militants have targeted Copts several times in recent months, and vowed to do so again.

Two suicide bombings at Palm Sunday services at churches in the northern cities of Alexandria and Tanta on 9 April left 46 people dead.

Another suicide bombing at a church in the capital in December killed 29 people, while a Christian community was forced to flee the town of el-Arish in the northern Sinai peninsula after a series of gun attacks in February. 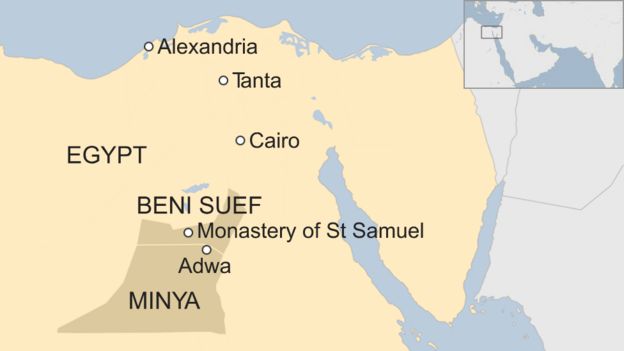 The Copts killed on Friday had been travelling to St Samuel's monastery to pray.

Their bus was in a small convoy that was stopped on a desert road near Adwa police station on the border between Minya and Beni Suef provinces.

Between eight and 10 gunmen wearing military uniforms attacked the convoy, officials cited witnesses as saying. The gunmen then fired at the vehicles with automatic weapons before fleeing in three 4x4 vehicles, they added.

Minya Province Bishop Makarios said many of the victims were shot at point blank range, the New York Times reported.

He said that children had been on the bus and were among the dead, adding that a pick-up truck in the convoy carrying workmen at the monastery was also targeted.

Minya governor Essam al-Bedawi said security forces had arrived at the scene and were fanning out along the road to the monastery and setting up checkpoints. 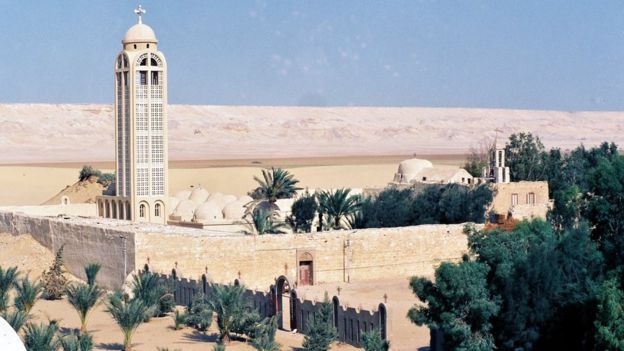 Copts make up about 10% of Egypt's population of 92 million.

Last month's attacks prompted President Abdul Fattah al-Sisi to declare a three-month nationwide state of emergency and promise to do whatever was necessary to confront jihadist militants, most of whom are based in northern Sinai.

But many Copts complain that the Egyptian authorities are not doing enough to protect them, says the BBC's Orla Guerin in Cairo.

There is now a real sense of fear, and a feeling of being hunted, she adds.