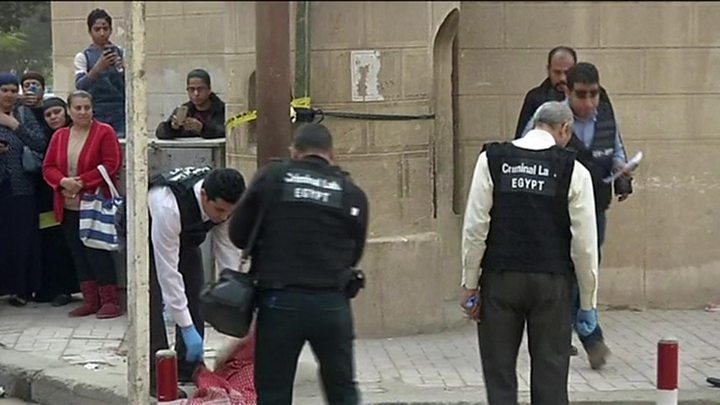 Nine people have been killed in two attacks on Coptic Christians in Helwan district, south of Cairo, Egypt's interior ministry has said.

Six civilians and a policeman died when a gunman tried to storm a church but was intercepted and arrested, it said.

It said the man had previously attacked a Coptic-owned shop in the same area, killing two brothers.

The interior ministry revised an earlier account given by the health ministry.

The initial report said 12 were dead, and suggested there were two attackers. It said one had been killed, and the other fled but was later captured.

More than 100 Christians have been killed in Egypt in the past year, with most attacks claimed by the local branch of the so-called Islamic State group.

Security forces have reinforced checkpoints in place around the capital in response to the attacks.

They announced plans earlier this week to protect festivities around the New Year and, on 7 January, Coptic Christmas. They include the deployment of rapid-reaction forces, combat troops and jamming equipment.

According to the interior ministry statement, the first attack on Friday took place at a household appliances shop. Then the attacker headed to the Saint Mina Coptic church, where he attempted "to trespass the church's perimeter security".

"The security forces have dealt with the attacker and managed to arrest him after he was injured," the ministry said. 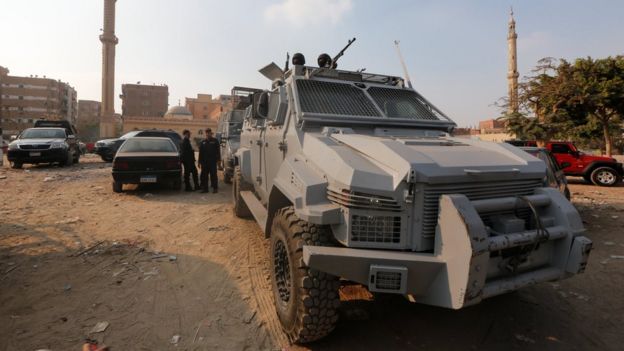 But it said that seven people, including an auxiliary policeman, had been killed and four injured as the gunman opened fire at the church.

The attacker also had an explosive device, a machine gun and 150 rounds, it added.

The ministry suggested he was known to security services, saying he was "one of the most active terrorist elements and he carried out several terrorist attacks which resulted in the martyrdom of a number of policemen and civilians".

However, the interior ministry account contradicts earlier ones from officials and witnesses, who spoke of a higher death toll and more than one attacker.

Video footage has also emerged appearing to show one gunman lying dead at the scene and another alleged attacker fleeing in a red car.

In the wake of Friday's attacks, President Abdul Fattah al-Sisi offered condolences to family members and vowed to continue "cleansing the country of terrorism and extremism".

Egypt's Copts have in the past accused the authorities of making only token gestures to protect them and these incidents will not help calm tensions, our correspondent Radwa Gamal says. 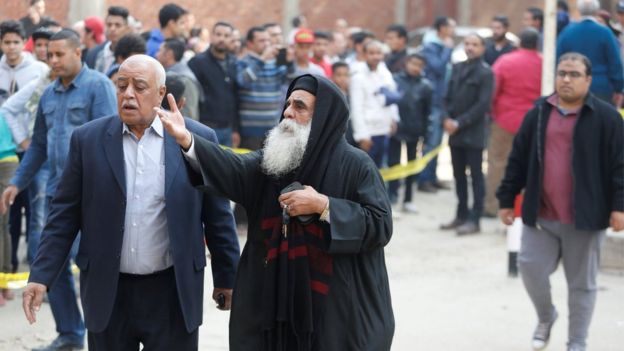 Egypt is a Muslim-majority country and its Christian minority - mostly members of the Coptic Orthodox Church - make up around 10% of the population.

Last Easter, on Palm Sunday, at least 45 people died in twin attacks on Coptic churches in Alexandria and the Nile Delta city of Tanta. At least 29 Copts were killed on a bus en route to a monastery in central Egypt in May, and a Coptic Orthodox priest was stabbed to death in Cairo in October.

The attacks have been blamed on, and in many cases claimed by, Islamists affiliated with so-called Islamic State (IS).