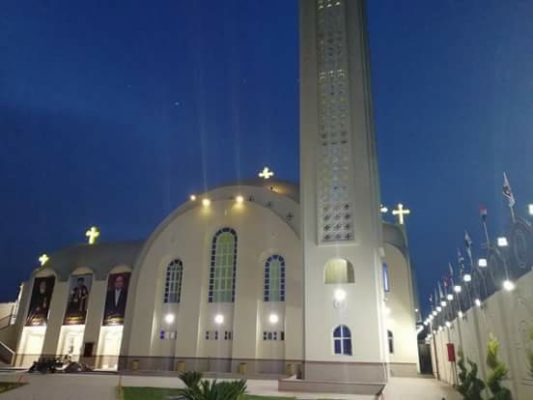 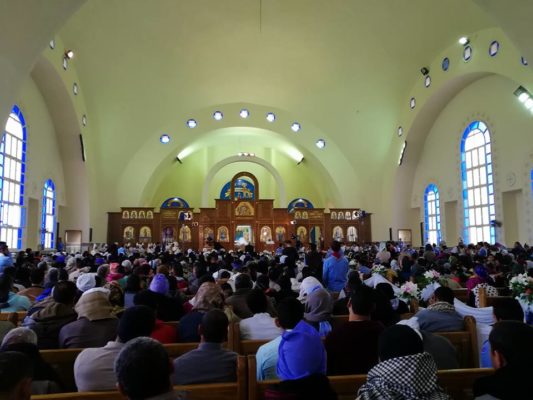 The first mass held in the Church of the Martyrs of Faith and Homeland on 15th February, 2018. PICTURES: World Watch Monitor.

It is a special day for the Coptic community of Minya province, Upper Egypt, as a new church was inaugurated this morning in Al-Our village in remembrance of 20 Egyptian Copts and one Ghanaian Christian beheaded by the so-called Islamic State on the Libyan coast three years ago on Thursday.

In the early morning, a mass was held at the new Church of the Martyrs of Faith and Homeland by Bishop Bevnotious. The church was packed with Christians who travelled to Al-Our from various parts of Minya – where the murdered Copts came from. Although the inauguration was not an official event – the governor of Minya did not attend – it still received extensive media coverage, partially because the construction of the church was funded by the Egyptian government. Security forces were present throughout the event.

Boushra Fawzy’s son Kiryollos was one of those killed. He was 22.

“We are very happy that we have this wonderful big church named after our martyrs. It is honouring them,” the father told World Watch Monitor. “We were happy today that a mass for the third anniversary of their martyrdom was held in their church and we felt a great joy during the service, because that was a dream for us.”

As part of the ceremony, the bodies of all 21 victims were expected to be reburied in one big coffin inside the church. However, World Watch Monitor learnt this week that the families were still waiting for their loved ones’ remains to be returned to them and had not been told when exactly it would happen.

Meanwhile, three days before the inauguration, in another part of Minya, the town council of Al-Edwa issued an order to demolish a memorial erected on the spot where 28 Copts were killed last May as they travelled to the church of St Samuel the Confessor on Ascension Day.

World Watch Monitor learnt that the memorial had been set up without official permission. However, the governor of Minya, Essam al-Bedeiwi, intervened and ordered the planned demolition to be halted until he had discussed the matter with the town council.

Boulos al-Samueli, a monk at St Samuel the Confessor church, told Coptic news site Watani: “Governor Bedeiwi also promised he would visit St Samuel’s next week, when he would look into two requests by the monastery: the first is to allow pilgrimage to the monastery, which was halted for security reasons following the terror attack in May 2017; the second is to allow the monastery to build a church in honour of the martyrs, on the spot of the attack.”

Two crosses were erected beside the memorial, which was made out of white bricks, next to a plaque showing the names of the victims.