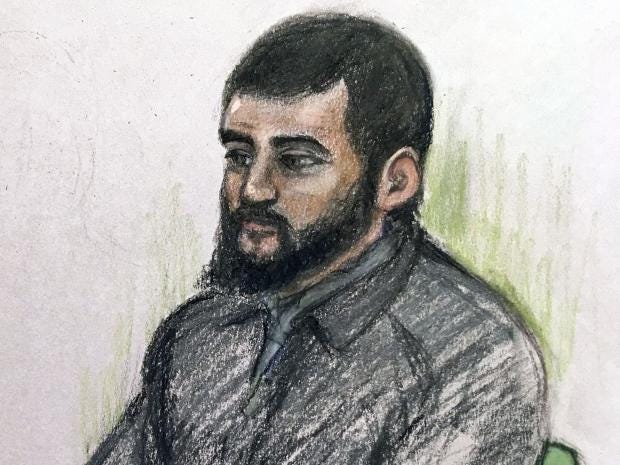 Heathrow Airport was on a long list of potential targets PA

An unqualified teacher has been convicted of trying to recruit an “army of children” to launch a series of Isis-inspired attacks on dozens of targets across London.

Umar Haque brainwashed young pupils he taught at an Islamic school and mosque and made them act out atrocities.

The 25-year-old was still ranting about the self-proclaimed Islamic State as he was dragged from the dock after being convicted of preparing acts of terrorism.

Haque became “fascinated” by the Westminster attack in March and discussed bringing his own “death squad” to the capital with two conspirators who helped the plot.

In a bugged conversation four days after the first Isis-claimed attack in London, he told a friend: “So what I want to personally is launch different attacks in all the different areas, one in Westminster, one in Stratford, one in Forest Gate, one...in so many different areas, yeah.

“We are a death squad sent by Allah and his messengers to avenge my Arab brothers' blood."

In conversations recorded as part of an intelligence operation that saw conversations in a friend’s home and cars recorded, Haque was heard discussing justification for killing civilians.

Haque discussed using a car, leaving bombs in a lift, and going for "a quick spin" around Westminster, and separately compared Isis gaining more territory to “us winning the world cup”.

Even though he had no teaching qualifications, Haque had access to 250 youngsters at two east London schools and the Ripple Road madrassa over five years, attempting to radicalise 110 of them.

​Haque was teaching pupils aged between 11 and 16 at the fee-paying independent Lantern of Knowledge school in Leyton.

He taught Islamic studies and PE between April 2015 and January 2016, with parents saying they were “horrified” after learning of his radicalisation attempts.

Haque also assumed the role of a teacher at the Ripple Road Mosque in Barking and "manipulated" children, telling them he intended to die a martyr and Isis was "good".

Prosecutors said he played terrorist videos depicting the burning of passports and beheadings with a knife or sword to "encourage them into his mindset".

Haque showed children graphic mages, including one of a dead boy, saying they would meet the same fate if they did not join him and promise to become a martyr.