After a three-year wait, the Egyptian Coptic families of 20 men beheaded by the so-called Islamic State in Libya in 2015 have finally received their loved ones’ remains.

The leader of the Coptic Church, Pope Tawadros II, accompanied by several bishops, priests and deacons, welcomed the 20 coffins at the Cairo airport on Monday evening, 14th May, with prayers and Coptic chants. 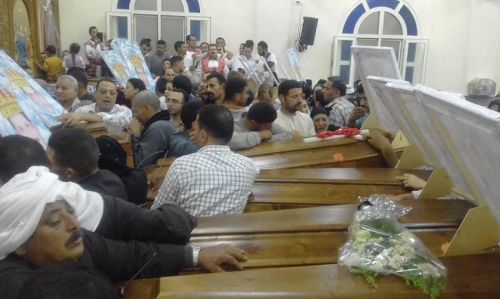 From there the coffins were transported to the village of Al-Our in Minya province, where the Church of the Martyrs of Faith and Homeland, dedicated to the victims, had been inaugurated in February in anticipation of their repatriation.

On Tuesday, the families gathered at the church, where the remains of the 20 Copts were placed in one large coffin to be buried in the chapel. Thirteen of the dead came from Al-Our, the seven other Copts from other villages in Minya.

The families of the victims described their mixed feelings to World Watch Monitor. Maleka Ayad, the widow of one victim, Tawadros Youssef Tawadros, said she felt both sadness and joy during the ceremony: “We feel inner peace because we are sure that all of our martyrs went to a good place in Heaven. They were simple and humble people on Earth and they have become great in Heaven now. They have lifted the heads of all Christians up and we are proud of them.”

Ebtsam Noshi Lamei, the widow of another of the victims, Samuel Alham Wilson, told World Watch Monitor: “I’m very proud of my husband Samuel because he was martyred on the name of Jesus Christ and he didn’t renounce the faith.” She added: “He honoured me, his sons and Christianity.”

The families and the clergy expressed their gratitude to the president, Abdel Fattah el-Sisi, and the Egyptian and Libyan governments, for their efforts in bringing about the return of the victims’ remains.

Libyan authorities announced the discovery of the men’s remains last October. Prior to the bodies’ repatriation, forensic samples were taken from them and sent to Egypt, to be compared with DNA samples taken from relatives of the 21. After scientists concluded that the bodies were those of the mainly Coptic group, the head of investigations at the Libyan Attorney General’s Office ordered on 5th May that the remains of the victims be transferred to Egypt.

Fr Maqar Issa, a priest at the Church of the Martyrs of Faith and Homeland, admitted he had doubted that the bodies would be recovered. “We had no hope that their bodies would be found after they were executed. We feel a great pride and happiness for their return to us. We congratulate ourselves, all Egypt and the families of the martyrs on their return to their homeland and church. And we congratulate the martyrs on getting the crowns of the martyrdom.”

Fr Youssef Ayad Attia described the day of the bodies’ return as one “engraved in history with golden letters”.

On 11th March, the families of the victims designated Fr Maqar Issa and the lawyer of the Samalut Diocese, Attallah Youssef Hanna, to complete the necessary paperwork on their behalf at the National Security Agency in Cairo for the bodies’ return. The families were told that upon successful completion of the documents, the bodies would be returned to them within 10 days.

Prior to that, in February, when the new church was inaugurated in Al-Our, the bodies were expected to be received and reburied in one big coffin inside the new church. But the ceremony took place and the bodies still were not returned.

The 21 victims, all daily labourers in Libya, were captured in two separate abductions by armed militants on 29th December, 2014, and 3rd January, 2015. The hostage-takers had first confirmed what religion was written on their ID cards, before taking the Christians hostage and letting Muslims go free.

IS then released a graphic video depicting the mass beheading of their captives, titled: “A message signed with blood to the nation of the Cross”. Video subtitles described the Christians as “people of the Cross, followers of the hostile Egyptian Church”.

In October, 2017, Libya officially confirmed it had found the bodies of the beheaded Christians. The 21 men were found close to where they were executed on a beach in the coastal city of Sirte. They were found with their hands still tied behind their backs and shrouded in the orange jumpsuits they wore when they were executed.

The defendants in the case are due to appear before the court after Ramadan, which ends on 14th June.