Egypt: Mob attack encouraged by police promise ‘No church will be allowed here’

A mob attacked a church in Minya, Egypt, on 13 July protesting against its legalisation and received a police officer’s approval, World Watch Monitor has learnt from local sources. 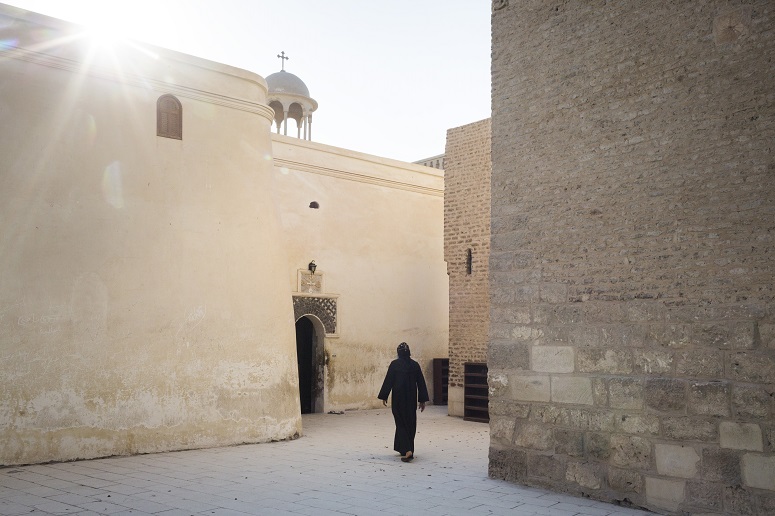 Several other villages in Minya have been attacked by mobs over the last few months, protesting against Coptic churches. (World Watch Monitor)

The only church in Ezbet Sultan Pasha village, where about 20 percent of the population is Christian, was built in September 2016. Apart from masses and prayer meetings, St. Karas the Anchorite Coptic Orthodox Church also held Sunday school classes and housed a nursery.

After a rumour spread in the majority-Muslim village that Copts had applied for the de-facto church’s legalisation, as is required by the August 2016 Law on the Organisation of the Construction of Churches, local Muslims started a demonstration in front of the church after Friday noon prayer on 6 July.

“The protesters were chanting slogans against us [Copts], such as ‘We don’t want a church in our village,’” Hany Farouk, a resident of the village told World Watch Monitor.

“We locked ourselves in our homes during the demonstration because we were afraid that they would attack us. Police didn’t do anything to disperse the demonstrators and didn’t arrest anyone of them.”

Demonstrations continued the following day with no intervention by the police, according to locals.

A week later, 13 July, a bigger mob comprised of residents of Ezbet Sultan Pasha and nearby villages, gathered in front of the church and started pelting it with stones and bricks, along with a house next to it, belonging to a Copt.

While police did not intervene, one of the officers apparently promised the protesters that no church would be allowed in the village. According to Farouk, this declaration encouraged the protesters who clapped shouting ‘Allahu akbar’. The mob dispersed afterwards. 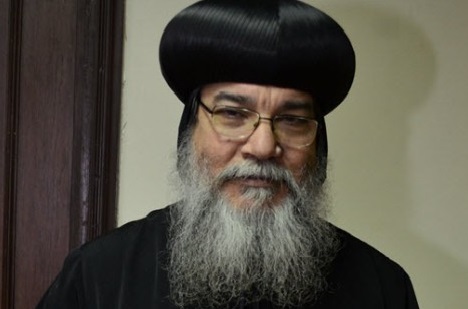 Following the incident, Anba Macarious, General Bishop of Minya, issued a statement in which the Diocese of Minya “denounced” the attack and the declaration of the officer who reassured that the demands of the demonstrators would be met. 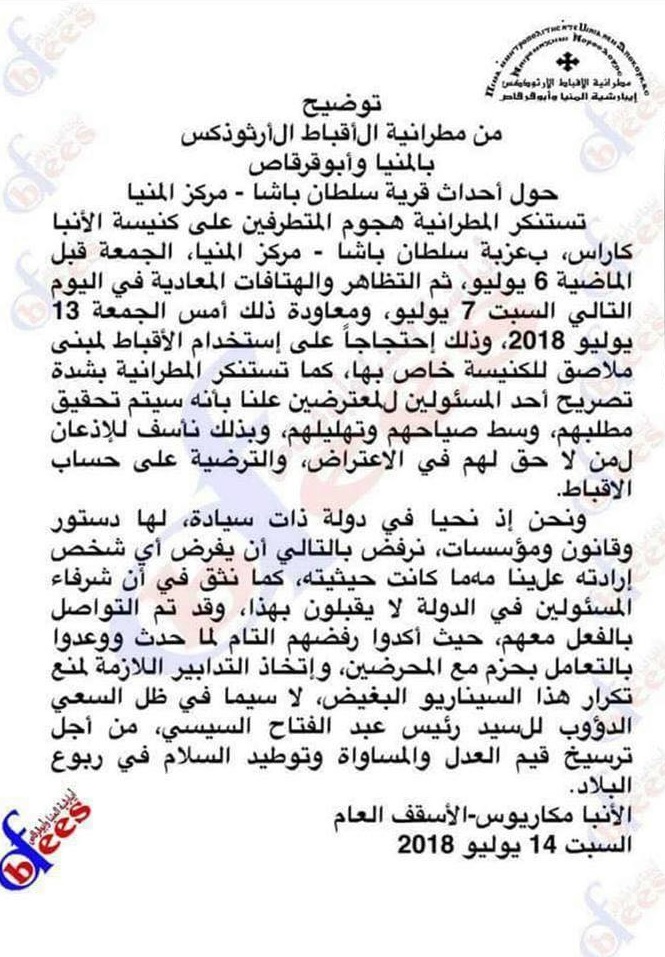 The Diocese of Minya “denounced” the attack on St. Kamar the Anchorite Church in a statement. (World Watch Monitor)

“The Diocese also condemns the declaration of one of the officials that the demand of the objectors will be met. We trust that the honourable officials of the state do not accept this; we have already communicated with them. They confirmed their total denunciation of what happened and promised to firmly deal with the instigators and take the necessary measures to prevent the recurrence of this abominable scenario, especially in light of the efforts of President Abdel Fattah Al-Sisi to consolidate the values of justice, equality and peace throughout the country,” the statement said.

Ayman Samir, a deacon at St. Karas the Anchorite Church, told World Watch Monitor that the church had been closed since 6 July.

“We didn’t celebrate the feast of St. Karas the Anchorite [a saint of the Coptic Orthodox Church] on 15 July as we used to do, and to congratulate each other on that wonderful occasion. This year we were deprived of that celebration because of the current events.”

Meanwhile, the Housing Minister has issued a letter to the church representative on the committee for the legalisation of the churches, which stated that it is forbidden to close or stop the religious rites in any building, the application of which has been submitted to the committee.

There are at least approximately 3000 pending applications from churches that still need to be examined by the government commission set up to verify whether they meet legal requirements.

World Watch Monitor has learnt that several other villages in Minya have been attacked by mobs over the last few months, protesting against Coptic churches.

Copts persuaded to drop charges against mob who attacked their church