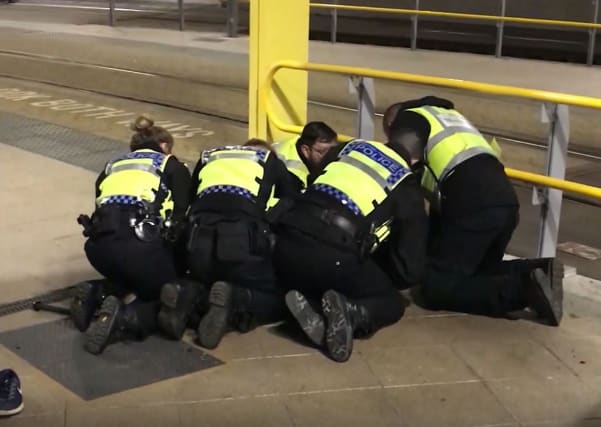 A knifeman allegedly shouted ‘Allah’ as he stabbed three people with a ‘long kitchen knife’ at Manchester Victoria Station, witnesses have claimed

British Transport Police said that one of their officers had been stabbed in the shoulder and a man and woman had been taken to hospital with knife injuries.

Counter-terrorism police are leading the investigation into the attack, but police have said ‘there is currently no intelligence to suggest that there is any wider threat at this time.

Assistant Chief Constable Rob Potts said the investigation was being led by counter terrorism police and officers were keeping an ‘open mind’.

The best New Year fireworks from around the world He said: ‘Tonight’s events will have understandably worried people but I need to stress that the incident is not ongoing, a man is in custody and there is currently no intelligence to suggest that there is any wider threat at this time.’ Officers reportedly used a taser and pepper spray to bring down the male suspect, who has been arrested on suspicion of attempted murder.

BBC producer Sam Clack, who witnessed the attack, said : ‘The guy, his exact words were, he said, “As long as you keep bombing other countries, this sort of shit is going to keep happening”.’

Pictures at the scene showed the two victims being tended to in the immediate aftermath of the attack.

Mr Clack, 38, said: ‘I just heard this most blood curdling scream and looked down the platform. ‘What it looked like was a guy with a woman of similar age and another guy all dressed in black.

A trainer could be seen on the platform after it was closed off  ‘It looked like they were having a fight but she was screaming in this blood curdling way. ‘I saw police in high-viz come towards him. He came towards me. I looked down and saw he had a kitchen knife with a black handle with a good, 12 inch blade. ‘It was just fear, pure fear.’ Mr Clack, who was travelling home, said police officers used a Taser and pepper spray before, ‘six or seven’ officers jumped on the man. He added the attacker seemed to be in his thirties and was very ‘aggressive’, ‘skittish’, and seemed ‘intent on causing harm, more harm than he actually did.’

The station is just metres away from Manchester Arena, where 22 people were killed in a terror attack in May last year.

The station is currently closed, but there are no plans to cancel the New Year’s Eve fireworks celebrations in the city centre.

BTP said in a statement: ‘Officers are attending Manchester Victoria station following reports of a man wielding a knife. The station currently remains closed, but New Year’s Eve celebrations will go ahead as planned  ‘We received the call at 8.52pm on Monday, 31 December. ‘A man has been detained and two members of the public, a man and a woman have been taken to hospital with knife injuries. ‘A BTP officer is also receiving treatment for a stab wound to the shoulder. ‘British Transport Police remain at the scene along with colleagues from Greater Manchester Police and the North West Ambulance Service.’