“ISIS bride Shamima Begum has been stripped of her British citizenship after showing no remorse for joining the terror group.” 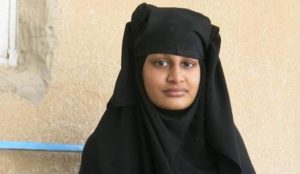 Her lawyer Tasnime Akunjee stated that her family is considering “all legal avenues to challenge the decision.” At whose expense? And now the family has launched its battle, vowing to “take Home Secretary Sajid Javid to court.”

Javid has “warned he will not hesitate to prevent the return of Britons who travelled to join ISIS.” Kudos to Javid. This should be a policy followed by every Western nation, out of concern for the safety of its citizens. Policymakers should keep in mind the people whom the Islamic State beheaded, raped and tortured.

These Islamic State brides were either participants in these atrocities or otherwise complicit in them in some manner. Jihadi brides of the Islamic State are often presented as poor little brainless victims lacking any will of their own, and who were led unwittingly by beastly Islamic State men into chambers of horror, but this is not the case. Shamima Begum and her counterparts are jihadists themselves. They have no remorse, and they raise their children with a murderous hate against infidels. It is stunning that anyone in the UK would take them at their word as they beg for sympathy. Their victims need sympathy. And the Western public needs protection from them.

More on this story. “ISIS bride Shamima Begum STRIPPED of British citizenship after showing no remorse for fleeing to Syria,” by John Lockett, The Sun, February 20, 2019:

ISIS bride Shamima Begum has been stripped of her British citizenship after showing no remorse for joining the terror group.

“Please find enclosed papers that relate to a decision taken by the Home Secretary, to deprive your daughter, Shamima Begum, of her British citizenship,” the letter read.

“In light of the circumstances of your daughter, the notice of the Home Secretary’s decision has been served of file today (19th February), and the order removing her British citizenship has subsequently been made.”

The letter – obtained by ITV News – went on to urge the Begum family to make their daughter aware of the decision while adding she had the right to appeal.

It’s not yet known how the ban will affect her newborn son Jerah – who is half British and half Dutch.

The schoolgirl’s family have said they are “disappointed” by the Home Office’s decision, said their lawyer Tasnime Akunjee.

“We are considering all legal avenues to challenge this decision,” he tweeted.

Begum’s dual nationality – as both her parents are of Bangladeshi – reportedly cleared the way for today’s decision.

However, Mr Akunjee, told The Independent the 19-year-old is a sole British national and had “never had a Bangladeshi passport”.

The Home Office has declined to comment on Mr Akunjee’s allegations but said: “We do not make people stateless.”

Earlier, a spokesman said: “In recent days the Home Secretary has clearly stated that his priority is the safety and security of Britain and the people who live here.

“In order to protect this country, he has the power to deprive someone of their British citizenship where it would not render them stateless.