“We will get rid of Christian people like you”: 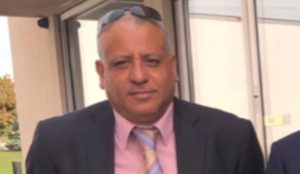 After Canada accepted his Asylum for Protection as a refugee from Kuwait, Hani Morris, an Egyptian Coptic Christian, filed a lawsuit against Kuwait, and more specifically against two major institutions there, Al Mulla Motors and United Ahli bank in Kuwait. The case was accepted by the Canadian Court.

Although the case is not directed against the State of Kuwait specifically, it is exposing corruption in state institutions, how justice is undermined in Kuwait, how to end the violation of the rights and dignity of foreign workers, and how corruption and nepotism are rampant in Kuwaiti state institutions. The Ambassador of Kuwait to Canada is Mr. Abdul Hamid Al-Failakawi.

Hani Morris traveled from Egypt to work in Kuwait in 1995 and worked there until he married in 2001. He fell in love with the State of Kuwait and its people, and brought his wife to live with him there. His wife gave birth to their first child, Hanin, in 2002, and his second child in 2007. For Hani and his family, Kuwait was for them as second homeland, and their chosen homeland; the two children loved the Kuwait they where they were born and grew up.

Mr Morris started a job as an auto valuer at Badr Al Mulla Company  in 2006. His issues started in January 2009, when one of the company’s clients, Ayad Fahim, an Egyptian citizen, filed a fraud case against the company. Hani Morris was taken to a police station in Kuwait City. Before he went to testify in the case, they called Hani’s manager, Naziza Abu Assi, who asked Hani to testify falsely and deny what happened to the client, but Hani refused to falsely testify.

After the company fired him from his job, they committed a felony crime against Mr Morris, claiming he was fired for being absent from work, despite the fact that he was never absent.

Mr Morris filed a complaint of perjury against the Company.  He was surprised that the prosecutor committed another  crime against him by refusing to look into the case.

Mr Morris then filed a complaint against the prosecutor’s decision to the court, but his complaint application was also rejected. Not surprisingly, the head of the court is a relative of the owners of the Al Mulla Motors company.

The complaint in the case of perjury against him remained in the courts for three years until the government of Kuwait finally reminded Mr Morris that he was an Egyptian and a Christian. They put him in jail after they forged a crime against him.

“Muhammad Abd al-Wala,” an employee in the same company, told Mr Morris “we will get rid of all Christian people like you.” They even seized Mr Morris’ car and took all his money before they threw him in jail.

What a travesty of justice was committed by the Kuwaiti Ministry of Justice.

Mr Morris was able to obtain asylum and come to Canada on 30 August 2017, and now lives with his family in Canada. After being persecuted in Kuwait, he filed a lawsuit against Badr Al Mulla, Anwar Al Mulla and Ahli United Bank, accusing them of causing persecution during his stay in Kuwait from 2009 to 2017.

The threats come from various telephone numbers, including a Kuwaiti number and other countries. The threats stated that Hani, his family, his lawyer and the journalist who published the story will all be killed for the publication and for the lawsuit against the corruption of Anwar al-Mulla, Hamad al-Marzouq, Sami Thabit and the various state agencies in Kuwait.

The Canadian Al-Ahram correspondent appealed to the Canadian intelligence service to take the threats seriously and provide protection to Canadian citizens. It is known that Kuwait is a rich country that can implement action on its own  threats.

The Canadian editor-in-chief of Al-Ahram said that he wouldn’t be surprised if such threats could be related to  al-Qaeda. He added that he would meet with a senior official from the Canadian Foreign Ministry to address the Kuwaiti Foreign Ministry in this regard, and that if the Trudeau government did not act, he would bring the matter to the Canadian Parliament through the  Conservative Party. The fact is that the Liberal party refused to help Mr Morris and Al Ahram newspaper; however, the Conservative party decided to help through the Kuwaiti former MP Faisal Al-Duwaisan, who acknowledged the threats which both Hani and Al Ahram newspaper received, and the persecution which Hani experienced from 2009-2017. It’s absolute proof of the injustice  the Egyptian Coptic family suffered in Kuwait, and the State of Kuwait is responsible for that. Their state institutions need to be cleansed of their corruption, racism and discrimination, which is against the Universal Declaration of Human Rights signed by Kuwait since its inclusion in the United Nations.

The case is still in the courts.