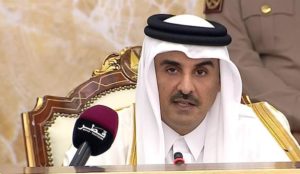 Qatar allegedly continues to put out billions of dollars to support and finance terrorist and extremist operations in Europe. International newspapers have reported that Qatar sends its funds through the Qatar Charity Foundation, where they recently provided about 71 million euros to be delivered to the leaders of the Muslim Brotherhood in Europe under a charitable cover.

It has been stated by various sources the alleged details of Qatar’s plans concerning the participation of the leaders of the Muslim Brotherhood in Europe and the participation of Doha, Qatar in establishing more than 90 centers for the terrorist group in various European countries.

Reports also revealed the contribution of the Qatar Charity Foundation in financing 140 projects in Europe worth more than 120 million euros, including 47 projects in Italy, 22 projects in France and Spain, and 10 projects in Germany. The British newspaper The Times, confirmed that the Qatari “Al-Rayan” bank in Britain was involved in providing financial services to terrorist organizations in the United Kingdom.

Another report said that Qatar allegedly spends billions of dollars to penetrate the Western education system to improve the image of the Qatar regime and cover its terrorist operations as part of and propaganda for the benefit of Doha. Lawyers confirmed that it is a violation of U.S. federal laws and requires comprehensive investigations.

Qatar’s contributions exceed more than 1.5 billion dollars to fund a range of initiatives in educational institutions at 28 American universities, making it one of the most prolific foreign funders in the American educational system, raising doubts about the possible hidden objectives of the Qatari government from these suspicious donations.

Rami Dabbas is a Jordanian freelance writer and analyst based in Amman, who stands for peace in the Middle East and is a pro-Israel advocate. This article is reprinted with permission of the author.