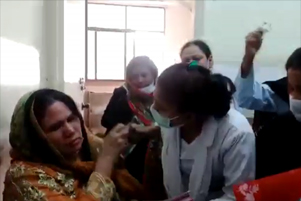 A Christian nurse, known for her Gospel singing, has been charged with blasphemy against Islam. Tabitha Nazir Gill was accused by a co-worker on January 28th after a dispute.

The head nurse at Sobhraj Maternity Hospital had issued orders that nurses were not to receive any cash from patients. When one of the nurses was seen collecting money, Tabitha reminded her of the policy; at which time, Tabitha encountered an attack and then was accused of inciting violence, along with blasphemy. Video footage has been released showing Tabitha being beaten, tied up, and locked in a room until police arrived.

After speaking with the parties involved, the local police determined that the accusations were baseless, and she was released. However, news of the incident spread quickly through social media, and a mob gathered at the police station the next day. In response, police filed a blasphemy charge against the Christian nurse despite lack of evidence.

According to a local pastor, Tabitha's two young children are "in a state of shock" after seeing the video of their mother's beating. A staff nurse named Kosar released a video of her own in which she said that what happened was unacceptable, reporting that Tabitha "is a good girl and has a kind attitude with everyone."

Accusations of blasphemy are commonly used to force favourable results in personal and business disputes. Even when the authorities reject the accusations, mob violence frequently results. For more on the persecution of Christians in Pakistan, and to review other posted reports, go to our country report.

Please pray on behalf of Tabitha, asking that there be a favourable outcome to these false charges. Also lift up Tabitha's family to the Lord as they deal with the traumatic effects of the situation. May her accusers realize the error of their ways and willingly drop their allegations. Continue to remember the many believers in Pakistan who are either presently imprisoned on similar charges or facing other forms of persecution because of their Christian faith.