"I therefore, a prisoner for the Lord,
urge you to walk in a manner worthy of the
calling to which you have been called...."
~ Ephesians 4:1 ESV 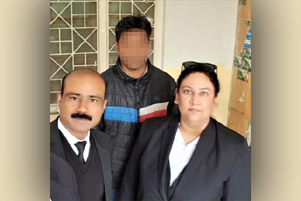 Two Christian men were reading the Bible aloud at a public park in Lahore, Pakistan, on February 13th when they were confronted by opposing Muslims. According to reports, Haroon Ayub Masih and his friend Salamat Mansha Masih were approached by Haroon Ahmad and his friends, who told the evangelical believers to stop what they were doing. Haroon Ayub and Salamat then offered them a Christian book titled, Water of Life.

Haroon Ahmad and his friends left after the initial confrontation, but returned shortly after, accusing the Christians of blaspheming Mohammad. Park security was then called and Haroon Ayub and Salamat were taken to the police station where a formal complaint was issued against them. According to the police report, Haroon Ahmad stated: "[Haroon Ayub and Salamat] said that the Torah and the Gospels are true books and that the Holy Quran does not tell the truth. They continued to dishonour Islam, hurting our religious emotions and feelings openly and publicly."

The police have arrested Salamat. However, Haroon Ayub and his family escaped and have gone into hiding. According to Nasir Saeed, Director of CLAAS-UK, Pakistani law has no restrictions on preaching or propagating religion. "Unfortunately, Pakistani society has been torn apart by intolerance and violence," he adds, "a far cry from the original ideal of a tolerant country." For more on the persecution facing Christians in Pakistan, go to our country report.

Remember Salamat and Haroon Ayub in your prayers as they deal with the false charges against them. Pray that God's wisdom will be granted to these Christian men, as well as to the lawyers and courts involved. May the Scriptures they read aloud at the park, and the Christian book they distributed, speak to the hearts of those with whom they had the opportunity to share the Gospel -- including Haroon Ahmad and his friends -- drawing each of them to faith in Christ.