Switzerland Has Voted Against Wearing ‘Burqa’ In Public 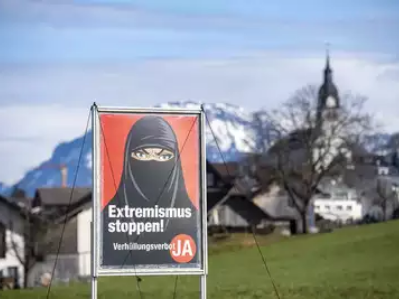 On Sunday, the Swiss voters have almost backed a ban on wearing full-face coverings in public places. The decision has been hailed by the supporters as a defensive wall against radical Islam. But the decision has been branded as one of the discriminatory ones by the opponents.

The official results have reflected that almost 51.2 percent of voters have supported the proposal along with a clear majority of the federal canton of Switzerland.

After years of debate in Switzerland, the so-called anti-burqa vote came and it is followed by similar bans that have taken place in other European countries as well. This has also happened in some of the states that have a Muslim majority an Islamic full-face veil for a woman is a very rare sight in the swiss streets.

The proposal for the ban over the full facial coverings did not mention explicitly whether it is a niqab or a burqa.

There have been campaign posters that were against all kinds of radicalism and extremism.

The posters by the rivals read this anti-burqa law is Islamophobic and it is quite useless and absurd.

This ban will imply that nobody is going to cover their face in the public completely. This can be in the open countryside and also in shops.

But there are some exceptions to it that include places of worship for safety and health reasons.

The votes took place at a time when it is mandatory to wear face masks on public transports and in shops because of the coronavirus pandemic. The right-wing party of the country also mentioned that they do not want radical Islam in Switzerland.