The mere fact that there has not been widespread public uproar over Muslim rape gangs and the coverup and minimizing of their atrocities by the highest officials in Britain indicates the apathy within British society in the face of failed leadership.

Qari Abdul Rauf has been on the loose, free to continue his abuse of innocent people, as British officials continue to implement measures on how not to appear “Islamophobic” instead of keeping their young women safe. 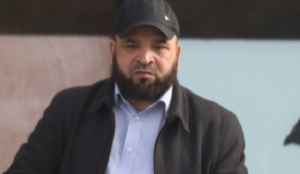 “WHY IS HE STILL HERE? Rochdale grooming ringleader shops in town where he abused children SIX YEARS after he was supposed to be deported,” by Richard Moriarty and Ryan Sabey, The Sun, April 4, 2021:

A CONVICTED grooming gang ringleader goes shopping in the town where he abused kids — despite being told he was going to be deported six years ago.

Qari Abdul Rauf was warned he would be kicked out of Britain after being jailed for his part in the Rochdale scandal, in which dozens of girls as young as 13 were assaulted or raped.

The Muslim preacher and eight other predators got prison in 2012 for appalling abuse, later dramatised in the BBC’s Bafta-winning Three Girls.

Rauf, 51, got six years after being found guilty of conspiracy to engage in sexual activity with children under 16 and trafficking for sexual exploitation.

But after being freed on licence in November 2014 — after just two years and six months in prison — he returned home to his wife and five children.

Rauf and fellow abusers Abdul Aziz, 50, and Adil Khan, 51, were told by the Home Office in July 2015 that they would be stripped of their UK citizenship and returned to their native Pakistan.

They lost an appeal against the citizenship ruling in 2018 but still have the right to challenge the deportation decision.

We pictured Rauf in Rochdale stocking up on food and fizzy drinks at a store, while clutching a food delivery service bag.

An onlooker said: “Perhaps he is working in a takeaway or as a food delivery driver.

“He used to ferry little girls around so his friends could have sex with them.

“Now he delivers fast food. It’s awful to think a victim could bump into him — or he knocks on their door to deliver some food.”…