Syria: Christian population reduced by two-thirds in a decade as Christians flee jihad

The mainstream media prefers to promote “Islamophobia” initiatives, and unvetted, suicidal mass migration policies, which allow some of the same jihadists who are murdering Christians in the Middle East and Africa an easy opportunity to enter Western countries and live off taxpayers while continuing their jihad.

The jihad worldwide continues with cover from a far-Left, activist media and an increasing number of intimidated conservatives. 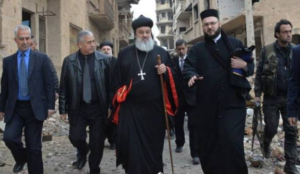 ERBIL, Kurdistan Region — About two-thirds of Syria’s Christians have fled the country in the past decade of conflict in the country, according to data from an Assyrian political party.

Christians made up eight to ten percent of Syria’s population before the start of the civil war in 2011. Today that number has decreased to three percent, the Assyrian Democratic Organization (ADO) told Rudaw. The party is close to the Turkey-backed Syrian opposition.

The number of Christians in the Kurdish-populated Jazira region in the very northeast of the country has decreased from 150,000 to around 55,000.

The data was confirmed by other Christian parties in Rojava. ADO obtained figures about Christians in regime-held areas from the Vatican.

Syria’s Christians helped to defeat the Islamic State group (ISIS). The Syriac Military Council is part of the Kurdish-led Syrian Democratic Forces (SDF) and is a partner force of the global coalition against ISIS….