Pakistan: Twelve incidents of persecution against Christian women and girls in two months

If what the political and media elites in the West tell us about Islam were true, the Islamic Republic of Pakistan would be a paradise of tolerance and peace for the nation’s religious minorities. Why isn’t it? 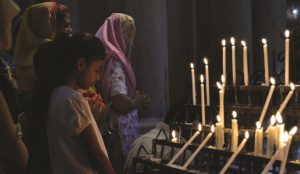 09/25/2021 Washington, D.C. (International Christian Concern) – In recent months, a disturbing spike in sexual assaults against Christian women and girls in Pakistan has been documented by International Christian Concern (ICC). In July and August alone, ICC discovered 12 incidents in which a Christian woman or girl was sexually assaulted or abducted, forcefully converted to Islam, and forcefully married to one of her abductors.

In Pakistan, Christian women and girls are doubly vulnerable to persecution. This is due to both their religious identity as Christians and their gender. Below is a summary of the incidents of persecution documented by ICC in the months of July and August 2021.

On July 5, Muhammad Akbar, a Muslim man, filed a police report against Shamim Bibi, a Christian mother of five, claiming that Shamim had converted to Islam and married him. Muhammad filed the report despite Shamin living with her Christian family in the district of Sheikhupura. Shamim refused the allegation and reported that Akbar was attempting to forcibly convert her to Islam.

On July 7, Aleesha, a 9-year-old Christian girl and resident of St. Paul Christian Colony in Hyderabad, was raped by a 45-year-old Muslim man named Baber. On the day of incident, Aleesha was alone in her house when Babar forcefully entered the home, beat Aleesha, and raped her.

On July 18, Samina, age 18, was abducted in front of her parents by Muhammad Ramzan and forcibly converted to Islam in Sangla Hill. The family continues to fight Ramazan to recover custody of their abducted daughter.

On July 21, Kainat, age 16, was abducted at gunpoint and raped by Muhammad Adeel while her parents were at work….

While 12 cases were documented by ICC over the course of these two months, the actual number of incidents of persecution against Christian women and girls is likely to be much higher.

According to a 2014 study by The Movement for Solidarity and Peace Pakistan, an estimated 1,000 women and girls from Pakistan’s Hindu and Christian community are abducted, forcefully married to their captor, and forcibly converted to Islam every year. The issue of religion is also often injected into cases of sexual assault to place religious minority victims at a disadvantage. Playing upon religious biases, perpetrators know they can cover up and justify their crimes by introducing the element of religion.