In traditional Islamic theology, Christians are idolaters for believing in the divinity of Christ. “They indeed have disbelieved who say, Indeed, Allah is the Messiah, son of Mary.” (Qur’an 5:17) 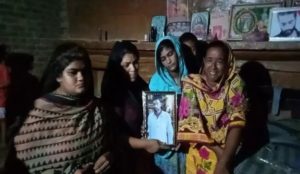 A Christian sewer worker fell unconscious after entering a known dangerous sewer with high toxicity, after being threatened with the sack when he initially refused.

Two Christian friends concerned about the unconscious man lost their lives trying to rescue him from the known death trap.

Company regulations were broken: One of the rescuers and a survivor had been on suspension due to previous unauthorised absence after already contracting illness while working in the drains.

At 9pm, 3rd October 2021, Michael Masih (33 yrs) was called to work at Metropolitan Corporation Sarghoda for an emergency sewage clearance, by the Sanitary Supervisor Muhammad Farooq. This was despite still being on suspension as he awaited the result of a disciplinary hearing for an unauthorised absence from 28th September 2021. Threatened with the sack Michael arrived at work only to be told to enter an unsafe sewer without any personal protective equipment (PPE).

Michael tried to refuse the work but received a heavy verbal tirade full of expletives. The disgusting language included the use of the term choorah an insult given to Christians meaning dirty cleaner and was heard by many of his colleagues. Having not been paid any salary during his suspension and desperate to bring some food and other domestic necessities to his home, Faisal grudgingly entered the dangerous sewer at around 10pm with intent to clear a blockage. Three sanitary supervisors Muhammad Farooq, Muhammad Amjad and Muhammad Rashid were present when Michael entered the sewage pipe without any safety equipment.

Within minutes Michael had passed out and other staff raised the alarm. The result of which was a barked command from Mohammad Farooq to two other Christian men Nadeem Masih (40 yrs) and Faisal Masih (34yrs) , to enact a rescue. The two men terrified for their own lives asked for some PPE but were refused, desperate to save the other mans life however, they quickly entered the main sewer. It should be noted that Nadeem Masih was a contracted member of staff without appropriate training for the main sewer and should never have been asked to enter.

The two rescuers grabbed Michael from the floor of the main sewer and managed to heave him above out of the sewer with the help of other workers. But as they were to begin their ascend out of the sewer to safety they were bought caught in a heavy current of water which dragged them to the floor far away where they became unconscious. Only at this point did Muhammad Farooq call emergency services on 1122.

An emergency team got to the sewer within 10 minutes but on arrival they looked down the pipe and could see the men but refused to save them. This was on account that they were choorah and would cause the Muslims to become ritually impure. The refusal lead to a call being made by one of the elderly Christian men at the site to his younger nephew Shahbaz Masih (38 yrs) who was off work at home – to come and rescue the two men….