IMAGE SOURCE,The killing of Conservative MP Sir David Amess is being treated as a terrorist incident by police. 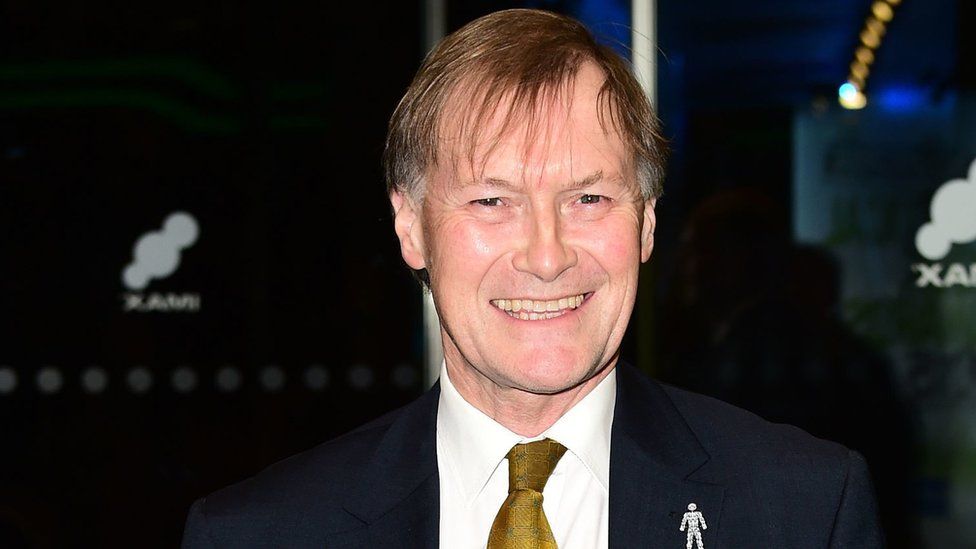 The killing of Conservative MP Sir David Amess is being treated as a terrorist incident by police.

Sir David was stabbed multiple times at his constituency surgery in Leigh-on-Sea in Essex on Friday.

The Metropolitan Police said there was a potential link to Islamist extremism. A 25-year-old British man of Somlai heretiage was arrested at the scene on suspicion of murder.

Home Secretary Priti Patel paid tribute to Sir David as a "man of the people" who was "killed doing a job he loved".

Speaking a short time later, Ms Patel said: "We are all struggling to come to terms with the fact that David Amess has been so cruelly taken away from all of us."

She said the Southend West MP "was absolutely there for everyone, he was a much loved parliamentarian, to me he was a dear and loyal friend, but also he was a devoted husband and father".

Ms Patel, who has asked police forces to immediately review security arrangements for MPs, maintained a balance could be found to allow face-to-face meetings with constituents to continue.

"We will carry on, we live in an open society, a democracy," she said. "We cannot be cowed by any individual or any motivation... to stop us from functioning".

Sir David, 69, had been an MP since 1983 and was married with four daughters and a son. He is the second serving MP to be killed in recent years, following the murder of Labour MP Jo Cox in July 2016.The Met said officers are carrying out searches at two addresses in the London area and are not seeking anyone else over the death.

The force believes the man, who is in custody in Essex, acted alone but inquiries into the circumstances of the incident are continuing.

Government sources have told the BBC he is a British national who, from initial inquiries, appears to be of Somali heritage.

BBC security correspondent Frank Gardner reports Whitehall officials are saying the arrested man was not on a database of terror suspects.

Scotland Yard's decision that the killing of Sir David Amess was an act of terrorism confirms that, on the basis of what they know so far, the killer was motivated to use violence to further their cause.

There's no public suggestion from investigations at the moment that there is a specific additional threat to MPs - but detectives and colleagues in MI5 will be delving deeply into the life of the suspect to understand how he reached this mindset and whether this was an attack by a "lone actor" or someone who is part of a network.

Secondly, it confirms the initial conclusion that there would need to be more resources thrown at the investigation.

Behind the scenes a wider range of detectives and support staff will now have been brought into action. If officers have recovered the suspect's mobile phone, they will now be forensically examining its contents to uncover potential evidence of mindset and planning.

A phone - and any bank cards - will also help detectives track the suspect's movements in the days and weeks before the incident. That in turn leads them to CCTV so they can build a three-dimensional view of his life.

Sir David was holding a constituency surgery - where voters can meet their MP and discuss concerns - at the church on Friday when he was attacked at 12:05 BST.

The Met later said the fatal stabbing was being declared a terrorist incident, with the investigation being led by Counter Terrorism Policing.

Officers are appealing for anyone with any information or with footage from CCTV, dash cams or video doorbell, to contact them.

Southend borough councillor John Lamb, who went to the scene after hearing the MP had been stabbed, said: "The paramedics had been working on Sir David for over two and a half hours and they hadn't got him on the way to hospital.

"We knew it had to be extremely serious and that the worst scenario could occur - we were hoping it wouldn't but it did."

The mood in Leigh-on-Sea, which Sir David represented for decades, is one of bewilderment.

As police and global media descend upon the usually quiet Essex town, people have gathered to pay tributes outside the Belfairs Methodist Church where the long-standing MP was attacked.

Resident Audrey Martin remembers him as "an absolute gentleman" who took time out to speak to her when she first moved to the area from Scotland.

"He just had this aura about him," she says.

"He was genuinely interested and listened to them which was fantastic," she says. "He got things done."

Julie Everitt, who has co-ordinated a vigil for him, says she would "always remember him for his genuine smile" and his passion for animal rights.

"He was a good gentleman, he had a good heart."

Read more from Orla and Richard at the scene here.

Paying tribute to Sir David on Friday, the prime minister described him as "one of the kindest, nicest, most gentle people in politics".

House of Commons Speaker Sir Lindsay Hoyle told BBC Two's Newsnight police were contacting all MPs to check on their security and reassure them.

He went ahead with his own constituency surgery on Friday evening, saying it was essential MPs retained their relationship with their constituents.

But Conservative MP Tobias Elwood - who came to the aid of a stabbed police officer during a terror attack in Westminster in 2017 - told the BBC he would recommend MPs temporarily stop having face-to-face meetings with constituents.

"You can move to Zoom... you can actually achieve an awful lot over the telephone," he said on Radio 4's World Tonight.

And Kim Leadbeater, the sister of Mrs Cox and MP for Batley and Spen, said her partner had asked her to stand down from her role following Sir David's death.

Who was Sir David Amess?

A Conservative backbencher for nearly 40 years, Sir David entered Parliament in 1983 as the MP for Basildon.

He held the seat in 1992, but switched to nearby Southend West at the 1997 election.

Raised as a Roman Catholic, he was known politically as a social conservative and as a prominent campaigner against abortion and on animal welfare issues.

He was also known for his championing of Southend, including a long-running campaign to win city status for the town.

Media caption,Watch how emergency services responded in the initial aftermath of the attack on Sir David Amess

He described him as a "great, great guy" and said faith communities had "lost their greatest supporter".

And Labour leader Sir Keir Starmer said it was a "dark and shocking day", adding that the country had "been here before" with the death of Jo Cox.