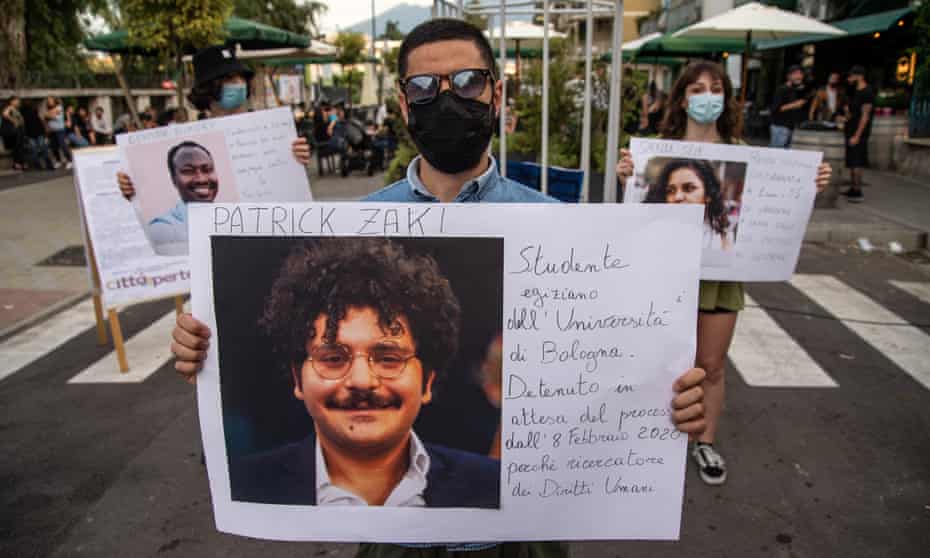 A protester holds up a picture of Patrick Zaki at a demonstration in Naples, Italy. Photograph: Ivan Romano/Getty Images
Agence France-Presse in Cairo

An Egyptian court has ordered the release of researcher Patrick Zaki, whose detention in February last year sparked international condemnation, particularly in Italy where he had been studying, his family said.

“I’m jumping for joy!” his mother, Hala Sobhi, told AFP. “We’re now on our way to the police station in Mansoura,” a city in Egypt’s Nile Delta, where Zaki is from.

Zaki still faces charges of “spreading false news”, “harming national security” and “incitement to overthrow the state”, among others.

His trial has been postponed to February, according to the Egyptian Initiative for Personal Rights (EIPR), a local NGO with which he worked.

In September, Zaki was referred to trial in front of an exceptional state security court for an article containing excerpts from his personal diary recounting the discrimination faced by the country’s Coptic Christian minority.

Coptic Christians make up about 10-15% of the country’s population of more than 100 million.

Amnesty International previously said that Zaki had allegedly been tortured while being interrogated by national security officers, including using electric shocks and beating.

In June this year, his mother told AFP: “When I imagine his confinement, I feel like I’m suffocating … We thought he’d be jailed for a few weeks, but it has gone on for over a year.”

Zaki’s detention drew condemnation particularly in Italy, where he had been studying and which recently held a trial in absentia over the killing of Italian PhD candidate Giulio Regeni in Egypt in 2016.

Regeni’s body was found bearing signs of torture, several days after he went missing on the fifth anniversary of the 25 Januaryuprising. An Italian parliamentary commission report recently blamed his torture and death on Egypt’s state security apparatus.

Thousands in Italy had signed petitions calling for Zaki’s release, and the country’s senate in April voted to grant him Italian citizenship, allowing him to receive consular support.

Shortly after the court’s decision, the Italian foreign minister, Luigi Di Maio, tweeted: “First goal achieved: Patrick Zaki is no longer in prison … A dutiful thanks to our diplomatic corps.”

Hossam Bahgat, who founded the rights group and was fined by a court last month for an “insulting” tweet, welcomed the news of Zaki’s release, writing: “Thank God” on social media.

Three EIPR staff were jailed last year, sparking an international campaign supported by celebrities including the actor Scarlett Johansson that resulted in their release.

Several researchers have been jailed, including Ahmed Samir, a postgraduate student at the Central European University in Vienna, and Kholoud Amer, head of the translation unit at the Library of Alexandria.

Macron had previously raised his case in a live press conference with Sisi in Paris but Shaath, the son of veteran Palestinian politician Nabil Shaath, has remained in prison since July 2019.

As we approach the end of the year, we have a small favour to ask. We’d like to thank you for putting your trust in our journalism this year - and invite you to join the million-plus people in 180 countries who have recently taken the step to support us financially, keeping us open to all, and fiercely independent.

The new year, like all new years, will hopefully herald a fresh sense of cautious optimism, and there is certainly much for us to focus on in 2022 - a volley of elections, myriad economic challenges, the next round in the struggle against the pandemic and a World Cup.

With no shareholders or billionaire owner, we can set our own agenda and provide trustworthy journalism that’s free from commercial and political influence, offering a counterweight to the spread of misinformation. When it’s never mattered more, we can investigate and challenge without fear or favour.

Unlike many other media organisations, Guardian journalism is available for everyone to read, regardless of what they can afford to pay. We do this because we believe in information equality. Greater numbers of people can keep track of global events, understand their impact on people and communities, and become inspired to take meaningful action.

If there were ever a time to join us, it is now. Every contribution, however big or small, powers our journalism and sustains our future.