by Martha Lee and Sam Westrop
The European Conservative
January 17, 2022 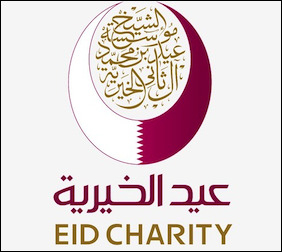 A trove of data uncovered by the Middle East Forum details almost 46,000 grants made by the Qatari regime-controlled Sheikh Eid bin Mohammad Al Thani Charitable Association, also known as the Eid Charity, to radical Islamic organizations all around the world. A significant amount ended up in Europe and North America: some 380 grants to 41 recipients, totaling just under $37 million, distributed between 2004 and 2019.

Although dwarfed by the total $770 million globally accounted for within the dataset —some of which appears to have been given to designated terrorist organizations—the Eid Charity's spending across the West reveals a clear pattern of Qatari monies being handed out almost exclusively to radical organizations.

It is not surprising that Eid Charity should emerge as a leading patron of Islamist extremism in the West. In previous years, European media has occasionally recorded the group's radical ties. In the Netherlands, in particular, journalists have previously pointed to Eid Charity's funding of Salafi organizations in Dutch cities, and note that its officials "are said to have funneled money to Al Qaeda in Iraq, Al Shabab in Somalia and Palestinian Hamas." Indeed, the Eid Charity's founder, Abd Al Rahman Nuaimi, is a known Al Qaeda financier who was designated as a terrorist by the U.S. government in 2013.

Despite its extremist links, the Eid Charity has been able to operate internationally with near impunity. In the Western world, the United Kingdom was its main target, with some 97 grants distributed there worth just under $9 million.

Some $2 million was given to the Al Muntada Al Islami Trust, a hardline Salafi charity. In 2004, the Henry Jackson Society reported that Nigerian police arrested Sheikh Muhiddeen Abdullahi, purportedly a senior Al Muntada Trust official, who is alleged to have confessed to serving as a middleman between Al Muntada and Nigerian jihadists. In 2013, a Nigerian human-rights activist testified before the U.S. House of Representatives, where he named Al Muntada as an organization he believed to be funding designated terror group Boko Haram. The trust also runs a mosque in West London, which The Times has reported is closely connected to Qatar and "is linked to Islamist mosques and schools elsewhere in the UK."

Furthermore, British media has long reported on the extremist links of this charity network. Journalist Andrew Gilligan noted: "Al-Muntada has close links to British mosques accused of radicalising young people into Isil, including al-Manar in Cardiff, attended by Nasser Muthana and Reyaad Khan, the first Britons to appear in an [Islamic State] propaganda video. Both mosques have also organised events with Mohammed al-Arifi, the now-banned extremist cleric accused of grooming the two young Cardiff men."

Former Al Muntada partners have included ISIS financier Nabil Al Awadi, as well as radical clerics such as Haitham Al Haddad, whom British media has frequently described as "one of the most active radical preachers in the country."

Almost $600,000 was provided by the Eid Charity to the Emaan Trust in Sheffield in 2013 and 2014 for the construction of its mosque. As Andrew Norfolk of The Times has previously noted, "The Emaan Trust's leaders have included men with close links to the Brotherhood. Another trustee resigned in 2017 after the exposure of his virulently antisemitic views, including the claim that Jews control the world and were responsible for 9/11."

Norfolk also revealed that the Emaan Trust has received substantial amounts of monies from Qatar Charity UK, a branch of another regime-controlled group in Doha that has long worked closely with the Eid Charity.

Seventy-seven grants, totaling over $6.3 million dollars, were also handed out to Help the Needy, a British Muslim charity based in London. Media reports claim that the organization is an official partner of the Eid Foundation; and its officials appear to also hold senior positions in Doha-based organizations.

In other European countries, the Eid Charity has also been generous with Islamist mosques and organizations, many of which are linked to terrorism. In Sweden, the Örebro mosque received $2.4 million between 2007 and 2016.

Örebro Mosque has undeniable links to terror: an ISIS recruiter preached there regularly until his arrest in 2015. The Swedish Security Service subsequently issued a press release which stated: "the Swedish Security Service have a clear picture that there is radicalisation and recruitment in Örebro." And the Örebro Mosque's spokesman has spread anti-Semitic tropes, accusing late Israeli PM Ariel Sharon of using the blood of Palestinian children to make pudding.

Eid Charity also donated $1 million to Sweden's Al Rashideen Mosque, also known as Gävle Mosque. In 2014, Gävle Mosque's imam, Abu Raad, applauded ISIS for taking over the Iraqi city of Mosul, and even encouraged his followers to finance the terrorist organization. The Swedish government subsequently declared that he "constitute[d] [a] qualified security [threat]" and decided to deport him, but the sentence was never carried out because of the purported risk of persecution that he faced in his native country of Iraq. Instead, he returned to his mosque, where he was "embraced" by the congregation.

Meanwhile, in France, almost $1.7 million from the Eid Charity went to institutions tied to the Egyptian Muslim Brotherhood, such as the Institut Européen des Sciences Humaines (IESH), which received $470,000 from the Eid Charity. The IESH was founded as a Brotherhood seminary (Christian Chesnot & Georges Malbrunot, Qatar Papers, p. 155), and its curriculum was designed by the Brotherhood's 'spiritual leader' Yusuf Al Qaradawi. IESH's former students also include Al Qaedaand jihadists (Qatar Papers, p. 162).

Another $442,000 went to the Mosquée de Saint-Ouen, whose imam, Abdelghani Benali, is also a professor at the IESH. Officially known as the Essalame Center, the mosque has been renamed Al Hashimi (the name of the private donor, the uncovered data reveals, who funded the Eid Charity grants).

In 2008, Eid Charity made a contribution of $66,000 to another French Islamic center in Poitiers, which appears to have been founded by Hadj Amor, while treasurer of the prominent French Islamist organization Musulmans de France (Muslims of France) (Qatar Papers, p. 179). Interestingly, the funding for the center was passed through a middleman: the L'Association des Musulmans d'Alsace (AMAL).

AMAL also received $262,000 from Eid Charity for the construction of the enormous An-Nour Islamic center in Mulhouse, which it manages. French journalists Christian Chesnot and Georges Malbrunot have previously alerted the public to Qatari attempts to create autarkic "micro-societies" in Europe. An-Nour is one of the most obvious examples of this trend, and, indeed, the Eid Charity notes that it will include a dawah (proselytization) center as well as a school, shops, and various other services.

As revealed by Chesnot and Malbrunot in their book Qatar Papers, AMAL also managed a contribution from the terror-linked Qatar Charity—in the same year, for the same center (p. 60). In both the UK and France, it appears multiple Qatari regime charities distribute funds in close coordination.

In 2008, Eid Charity donated $457,000 for the construction of an Islamic center in the French town of Villeneuve d'Ascq. The center seems to be a priority: it also received funds from Qatar Charity that again were passed through AMAL.

In Germany, Eid Charity donated $400,000 to the Arabischer Kulturverein (Arab Cultural Association), which appears also to be known as the Al Muhsinin mosque. According to German academic Susanne Schröter, Al Muhsinin is "regarded as an important center of Salafi activities" that "counts several of its members among the ranks of Al-Qaeda," and where radical preachers "encouraged followers to travel to Al-Qaeda training camps."

Eid Charity grantees appear sometimes to serve as middlemen by distributing monies to other radical institutions. For example, the Arabischer Kulturverein gave $68,000 to the Assalam Mosque in Essen, also a known "Salafi hub," according to academic Johannes Saal. Jihadists such as Silvio K, described by the German media as the "German face of the Islamic State," regularly attended the mosque. In 2009, German authorities deported one of its congregants who was in touch with Osama bin Laden's former bodyguard and possessed bomb-making instructions in his apartment.

In the Netherlands, a contribution of $1.1 million from the Eid Charity through the Dutch Waqf Foundation was used to fund the infamously extreme Al Furqaan mosque in Eindhoven. Its seminars were attended by members of Al Qaeda's Hamburg cell, which played a key role in the 9/11 attacks.

In Switzerland, the Swiss Islamic Shura Council received $208,000 from the Eid Charity. One of its board members has been convicted for producing jihadist propaganda: he traveled to Syria to interview a high-ranking Al Qaeda official, and later posted the video on the Shura Council's YouTube channel. Two other board members were also implicated. The Swiss Shura Council also invited the infamous Salafi preacher Mohammed Al-Arifi to its annual meeting in 2013, although he was prevented from attending following the Swiss government's decision to deny him entry for five years because of his extremist rhetoric.

In Canada, where over $6.7 million of Eid Charity grants have been distributed to eight organizations, authorities have previously warned about the influence of the Eid Charity, with the government's Canada Revenue Agency (CRA) noting that the Qatari charity appeared to "control" the Islamic Society of British Columbia (ISBC). At the time, a CRA official wrote that "publicly available information ... indicates that the Eid Foundation is alleged to have provided support to terrorism."

This new data uncovered by the Middle East Forum corroborates the CRA's concerns, revealing 11 grants from the Eid Charity to the ISBC, totaling over $326,000.

In the United States, almost $100,000 routed through Canada from the Eid Charity appeared to fund the Colorado Muslim Community Center outside Denver, an institution controlled by notorious hardline Salafi cleric Karim Abu Zaid, an unabashed apologist for the Taliban.

Since 2014, Saudi Arabia has gradually reduced its efforts to fund Muslim communities around the world. Once a key supporter of international Islamism, Saudi Arabia and its allies in the Gulf now regard groups such as the Muslim Brotherhood as dangerous terrorist organizations. Financially, however, many radical organizations across multiple Western Islamic circles appear to survive unscathed from the loss of one of their largest donors. Who, then, has filled the gap?

Qatar has long been suspected as a possible replacement, and plenty of anecdotal evidence has previously tied Doha to terror finance. This $770 million of Eid Charity support may just be a tiny proportion of Qatar's total spending on its radical partners. While the Eid Charity is just one institution among dozens used by the regime to front its financial activities, this newly uncovered data presents the most extensive evidence so far of the regime's terror-linked Islamist agenda.

Martha Lee is the research fellow for Islamist Watch, a project of the Middle East Forum. Sam Westrop is the director of Islamist Watch.