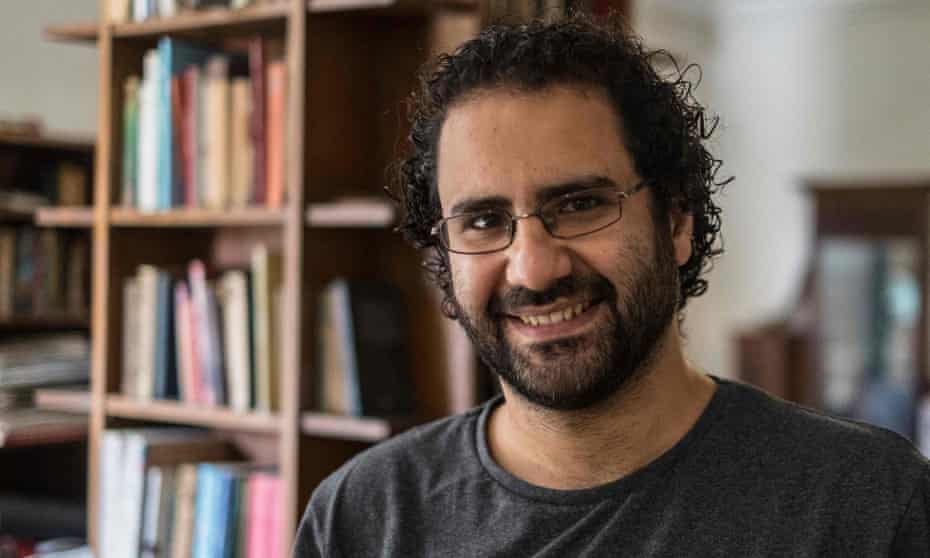 Alaa Abd El Fattah’s family have accused the British government of doing too little to secure his release.
Ruth Michaelson
Inside Alaa Abd El Fattah’s cell in the Wadi al-Natrun prison complex – once nicknamed “the valley of hell” for its location in the middle of the desert – fluorescent lights stay on 24 hours a day, along with CCTV to monitor his every move. Now 65 days into a hunger strike, the blogger and activist has become a symbol of resistance against Abdel-Fatah al-Sisi’s regime.

But despite becoming a British citizen last year, he is no closer to being released. His family fear that foreign secretary Liz Truss is failing to do enough to free him. “You would think that the moment he became a British citizen, something would change, not just because of the leverage of another citizenship but also the good relations between Egypt and the UK,” said activist Mona Seif, Abd El Fattah’s sister, who also acquired British citizenship last year.

“I feel the foreign secretary wants to remain detached from Alaa’s case and our family, despite how critical the situation is,” she said. “It’s loud how silent she is about Alaa, and I think it’s intentional.”

The family believe time is running out, and that his body can only endure so much as Egyptian officials stall. British consular officials in Cairo have been stonewalled when trying to visit him to assess his health.

The family say the soft diplomatic approach favoured by British officials so far is allowing Egyptian authorities to slow efforts to free him, further endangering his life.

Abd El Fattah was a figurehead of Egypt’s 2011 uprising, which overthrew former autocrat Hosni Mubarak through a groundswell of popular protest. He has spent much of the past decade behind bars, first for organising demonstrations against a law banning protest and then on alleged violations of national security. Last December, he was sentenced to a further five years in prison for “spreading false news undermining national security”. The charges centred on a retweet from years earlier, mentioning torture inside another maximum security facility where he was later held.

Boris Johnson spoke with Sisi in late March, and raised Abd El Fattah’s case. Britain is a strategic ally for Egypt, its largest business partner, and supplier of at least £24m in arms in recent years. The UK is also working to hand over the presidency of the Cop27 climate talks to Egypt, set to host them in November. Egypt has said it will allow climate protests alongside the talks, a break from existing laws which all but ban public dissent, and which Abd El Fattah was jailed for breaching in 2014.

Despite Johnson’s visit, little has changed. “It’s hard not to feel there’s a certain amount of disrespect happening here, and we’re not sure why the British are tolerating it, especially from a strategic ally,” said Abd El Fattah’s aunt, the acclaimed author Ahdaf Soueif. “There couldn’t be a better case for Liz Truss to stand up and state clearly that there are certain British values that won’t be compromised, and that this one case embodies them.”

A spokesperson for the Foreign Office said: “We are deeply concerned for his health and wellbeing, which is why we are working urgently to secure consular access.” 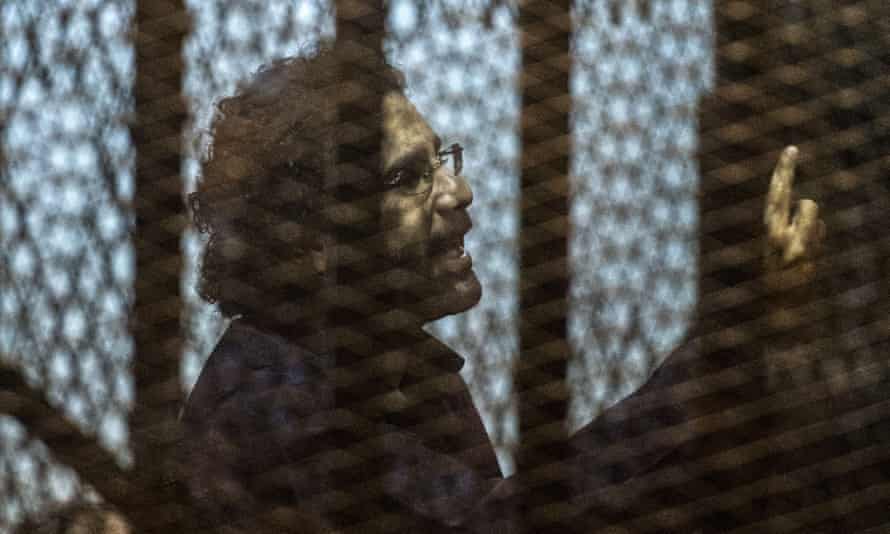 Alaa Abd El Fattah in the defendant’s cage during his trial in 2015 for insulting the judiciary. Photograph: Khaled Desouki/AFP/Getty Images

Sisi, who swept to power in a military coup in 2013, has long claimed “there are no political prisoners in Egypt”, even as his regime has built sprawling new facilities to hold the thousands detained for even minor crimes. “Alaa has become a symbol of everything they hate,” Soueif added.

Pressure has mounted on Truss, notably in a recent letter from a group of 35 MPs and peers demanding “urgent”, action from her on this case. “If this situation continues, we are concerned a dangerous precedent will be set for British citizens overseas and the values we uphold,” they said.

Observers point to the Egyptian authorities’ ability to stall questions on their abuses – with deadly results. This has notably included an attack on a group of tourists with American-made weapons in 2015, the murder of Italian doctoral student Giulio Regeni the next year, and the death of American national Mustafa Kassem in an Egyptian prison in 2020, following a hunger strike in protest at his detention.

Abd El Fattah’s entire family have been targeted for arrests, assault and abuse for decades. But it is Alaa who has endured the most, largely held inside a maximum security facility in Cairo since 2019, where surrounding cells were vacated and he was driven to court in a soundproof truck in order to isolate him and two cellmates from the outside world. For years, he was deprived of books and writing materials, although last year he published a book of essays that included writings smuggled out of prison.

After beginning a hunger strike in April, Abd El Fattah was moved to the Wadi al-Natrun facility, where he slept on a mattress and received books for the first time in years.

Seif believes a possible reason why Abd El Fattah has been singled out for extreme punishment stems from a personal grudge from Sisi himself, who detained Abd El Fattah’s father Ahmed Seif lel-Islam during the 2011 protests while head of Egypt’s military intelligence.

“You won’t see the light of the sun again,” Sisi told him. Seif el-Islam, unwilling to be deferential, retorted: “You’re completely unaware of what’s happening outside, we will be free, and what’s happening is beyond your control.”

Sisi recently called for a “national dialogue”, and has pardoned some former prisoners of conscience, including dual nationals who renounced their Egyptian citizenship in order to go free.

Soueif believes the forthcoming Cop27, Sisi’s talk of dialogue and Abd El Fattah’s declining health mean time is of the essence to free him. “There’s no better moment to push. This is really it. This is when it has to happen,” she said.

Some things are ‘nice to have’: TV subscriptions, restaurant meals, new clothes. Other things are ‘need to have’: food, water, heating. And access to reliable, trustworthy information.

As the cost of living crisis sweeps the world, rising costs mean many people around the world will be cutting back on the ‘nice to have’

But news is most certainly a ‘need to have’. It is essential to ensure justice and fairness prevail at a time of squeezed living standards, economic mismanagement and gross unfairness towards the disadvantaged. Without trusted, independent news, we will be blind to the complex crisis that lies ahead. This is the most important time to know as much as possible about what is going on.

Rising energy costs and food bills mean that many readers cannot afford to pay for news. But as a reader-funded news organisation, we are reliant on the support of those who can manage it. If you can, please consider showing your support for open, independent Guardian journalism today, so we can keep it freely available for everyone. This means millions more can understand the events shaping our world, understand their impact on people and communities, and become inspired to take meaningful action.

Unlike many others, the Guardian has no shareholders, no billionaire owner. Just the determination and passion to deliver high-impact global reporting, always free from commercial or political influence. Reporting like this is vital for democracy, for fairness and to demand better from the powerful.

We’re proud to say we now have more than 1.5 million supporters in 180 countries. Will you join them? Every contribution, however big or small, powers our journalism in tight economic times and sustains our future.