Woman in UK 'groomed' as bomber 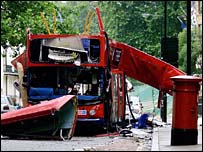 The former wife of a British Islamist extremist has said her husband suggested she carry out a suicide bombing against the UK.

Speaking exclusively to the BBC's Newsnight programme, the woman said her husband showed how she should strap an explosive belt around her body.

She told the BBC that three weeks before the 2005 London bombings she was warned "something big" would happen.

The woman said her husband was a threat to the UK and completely "brainwashed".

The BBC is not identifying the South Asian woman for security reasons. However, her husband is known to have fallen in with UK extremists sympathetic to the aims of Osama bin Laden.

In the interview, the woman told Newsnight's Richard Watson how her husband and fellow extremists would talk about what they believed to be their duty to follow a course of "jihad" - in this context referring to attacks against the perceived enemies of Muslims.

"He used to say we should all do jihad because he used to give an example of a woman who was a suicide bomber in India, who killed herself," she said in the interview.

"My husband told me I should join him to participate in jihad as well."

The woman told the programme her husband attempted to give her instructions in how to turn herself into a suicide bomber by concealing explosives under baggy, traditional, Islamic clothes.

"He would tell me how to use a [bomb] belt around the waist," she said. "Whenever he would discuss these matters I just would ignore him and go to the kitchen."

The woman said: "I told him I'm not interested at all. He was very clever. He told me how the girls tied the suicide belt around their waist and [wore] the hijab over the top.

"I would go to the kitchen or visit my friend. I told him that I don't want to listen to these sorts of things. Why should one spoil her or his life to kill innocent people? I would walk away."

In the interview, the woman claimed that three weeks before the 7 July 2005 London bombings her husband and his jihadi associates were warning about an attack.

"He said that something would happen and he would flee but I would be trapped. I told him I'm not going anywhere, I will stay.

"He said all his other colleagues are sending their wives away so I should leave as well."

Asked what kind of threat her former husband posed, she said: "He doesn't care if British people die. He was so brainwashed by the radicals, he could do anything."