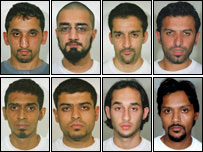 Seven men have been jailed for up to 26 years over an al-Qaeda-linked plot to kill thousands in the UK and US.

Woolwich Crown Court heard they were in a "sleeper cell" led by Dhiren Barot, who is already serving a life sentence.

In the plot, countered by police in Operation Rhyme, the men played supporting roles to Barot whom prosecutors say had devised multiple bombing operations. These resembled professional business plans in their complexity and detail.

He also researched blowing apart a London Underground tunnel beneath the River Thames to drown hundreds of commuters.

Prosecutors said that Barot presented his meticulous plans to al-Qaeda figures hiding in Pakistan. He submitted detailed funding requirements and explained how the campaign would benefit their cause.

Back in the UK, the seven men were vital for Barot to push ahead with the plots in the summer of 2004, playing roles as couriers, drivers and taking counter-surveillance measures in an attempt to throw the security services off the scent.

Barot sub-contracted key parts of his plotting to other members of his team, utilising their skills in devising false identities, as minders and researchers, prosecutors said.

Deputy Assistant Commissioner Peter Clarke, head of the Metropolitan Police's Counter Terrorism Command, said that although the seven did not instigate the planned attacks, Barot needed their help and expertise.

He added: "Dhiren Barot and his gang were determined terrorists who planned bombings on both sides of the Atlantic.

"The plans for a series of co-ordinated attacks in the United Kingdom included packing three limousines with gas cylinders and explosives before setting them off in underground car parks. This could have caused huge loss of life.

"The plans to set off a dirty bomb in this country would have caused fear, panic and widespread disruption."

Mr Clarke said the men were skilled in anti-surveillance techniques, with Feroze and Jalil having travelled hundreds of miles to use an internet cafe.

Mohammed Naveed Bhatti, 27, of Harrow in north London, was jailed for 20 years; Junade Feroze, 31, of Blackburn, received 22 years and Zia Ul Haq, 28, of Wembley in north London, got 18 years.

Abdul Aziz Jalil, 24, of Luton, was jailed for 26 years; Omar Abdur Rehman, 23 of Bushey in Hertfordshire, was jailed for 15 years and Nadeem Tarmohamed, 29 also of Wembley, received 20 years. Qaisar Shaffi, 28, of Willesden, north-west London, was sentenced to 15 years.

Sentencing the seven, Mr Justice Butterfield said anyone who participates in such a plan "will receive little sympathy from the courts"

He added: "Barot was the instigator of this terrorist planning, he was by some considerable distance the principal participant in the conspiracy.

"Each one of you was recruited by Barot and assisted him at his request."

The judge told the men the pain caused to their families as a result of their imprisonment "is but a tiny fraction of the suffering that would have been experienced had your plans been translated into reality".

Woolwich Crown Court was told that Bhatti used his first-class degree in engineering to research how the bombs could work. Feroze acted as a driver and led counter-surveillance checks - but also researched bomb parts in catalogues.

Ul Haq had a degree in architecture and acted as a "consultant" on the best way to bring down buildings. Jalil rented a safe-house for the men and researched radioactivity.

Rehman is said to have studied how to disable electronic security and fire control systems.

Shaffi was the only man to plead not guilty. He joined Barot on his US reconnaissance trip, although he was replaced by Tarmohamed in the States after falling ill.

Home Secretary John Reid said: "The outcome of this trial once again shows the extent of the very real and serious threat the UK faces from terrorism."