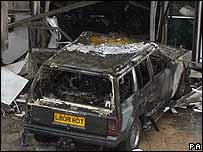 Glasgow and London are becoming "ever clearer", the UK's top counter-terrorism officer has said.

Deputy Assistant Commissioner Peter Clarke said he was "absolutely confident" of uncovering details of the attackers' methods and network.

A Jeep containing gas cylinders was driven into Glasgow Airport a day after two car bombs were found in London.

Five people are being held, but police are thought to be hunting a suspect.

BBC correspondent Daniel Sandford said that might explain why the country remained on its highest state of security alert - critical, which means an attack is expected "imminently".

Two of those held by police are a 26-year-old man and 27-year-old woman who were arrested on the M6 near Sandbach, Cheshire, on Saturday night.

The man has been identified by the BBC as Dr Mohammed Asha.

Both have been taken to Paddington Green police station in London for questioning.

Another 26-year-old man arrested in Liverpool on Sunday remains in custody at a Merseyside police station.

One of the two suspects held at Glasgow Airport on Saturday suffered severe burns and remains in a critical condition, and under armed police guard, at Royal Alexandra Hospital, in Paisley.

The BBC has learned those arrested are believed to be of varying Middle Eastern nationalities.

Mr Clarke earlier described the investigation into the failed bombings as "extremely fast-moving".

"It is no exaggeration at all to say that new information is coming to light hour by hour," he said.

"I'm confident - absolutely confident - that in the coming days and weeks we will be able to gain a thorough understanding of the methods used by the terrorists, of the way in which they planned their attacks, and of the network to which they belong."

He said forensic searches of vehicles were proving "extremely valuable" and thousands of hours of CCTV were being sifted through.

Elsewhere, Merseyside Police have been searching two addresses in the Liverpool area.

And Staffordshire Police said its officers had been searching an address in Newcastle-under-Lyme with the West Midlands Counter Terrorism Unit and Met personnel.

The UK moved to its highest level of terror alert after the Jeep Cherokee crashed into the main doors of Glasgow Airport's main terminal and burst into flames on Saturday afternoon.

Prime Minister Gordon Brown told Andrew Marr on BBC One's Sunday AM it was "clear that we are dealing, in general terms, with people who are associated with al-Qaeda".

"It's obvious that we have a group of people - not just in this country, but round the world - who're prepared at any time to inflict what they want to be maximum damage on civilians, irrespective of the religion of these people who are killed or maimed," Mr Brown said.

Strathclyde Police issued the registration number of the Jeep used in the attempted attack on Glasgow Airport - L808 RDT - and appealed for information about sightings of the vehicle in recent weeks.

A controlled explosion was carried out on a car at the hospital where a suspect is being treated. It is thought to have been connected to the failed airport bombing, police said.

Searches have also taken place at addresses in Houston, Renfrewshire, close to the airport.

Glasgow Airport was fully opened on Sunday afternoon, almost 24 hours after the incident.

Assistant Chief Constable John Malcolm, of Strathclyde police, said the force was receiving about 100 calls an hour from the public.

"This reflects the outrage felt in our communities at this act, and the calls we are receiving are supportive of the police actions," he said.

The attempted airport attack came a day after two Mercedes containing petrol, gas cylinders and nails were found outside the Tiger Tiger club in London's Haymarket and a nearby street on Friday.

Their devices did not detonate.

Security has been stepped up across the country.

A number of airports have taken extra measures, including Heathrow, Edinburgh, Newcastle, Birmingham, Manchester and Blackpool.

Heathrow's terminal was closed for a period on Sunday after a suspect package was declared safe.

There was heightened security and a heavy police presence at Wembley Stadium, in London, where up to 63,000 people attended the memorial concert for Diana, Princess of Wales.

Security is also to be stepped up at the Wimbledon Championships, in south-west London, when the tennis tournament resumes on Monday.

Road blocks have been set up in front of the gates to the All England Club.

Deputy Chief Constable Andy Trotter said British Transport Police would "do everything we possibly can to make people safe in their journeys to work tomorrow across the country".

Home Secretary Jacqui Smith will make a statement on the situation in the Commons on Monday.

Police have urged anyone with information to phone the confidential Anti-Terrorism hotline number on 0800789321.

Have you been affected by this story? Have you witnessed any of the arrests? Use the form below to send us your comments.