Terror suspects all linked to NHS, 8 Doctors so far 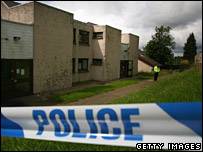 Eight people arrested in connection with failed car bombings in Glasgow and London all have links with the National Health Service, the BBC has learned.

Seven are believed to be doctors or medical students, while one formerly worked as a laboratory technician.

A suspect in hospital after the Glasgow attack has been named as Khalid Ahmed, who is believed to be a doctor.

A man arrested in Liverpool on Sunday has been named as Sabeel Ahmed, 26, who trained as a doctor.

Two men were also arrested in Blackburn on an industrial estate, initially under terror laws, but are now being held under the Drugs Act after police said they were no longer being treated as terror suspects.

Heathrow Airport's Terminal 4 has reopened after a suspect bag sparked a security alert.

BAA said the departure lounge was partially evacuated and departing passengers are being rescreened, leaving thousands of people facing delays.

Tube trains on the Piccadilly Line were not stopping at Heathrow Terminal 4, but the station serving terminals one, two and three remained open.

Seven doctors or medical students have been arrested in England, Scotland and Australia in connection with the attacks. All worked in NHS hospitals.

Australian media have identified a man arrested at Brisbane Airport as Dr Mohammed Haneef, 27, who has worked at Halton Hospital in Runcorn, Cheshire. He was detained while trying to board a plane to India.

On Wednesday morning, the Metropolitan Police said a counter-terrorism officer was travelling to Australia to liaise with authorities.

Dr Haneef worked at the Gold Coast Hospital in Southport, eastern Queensland, and was previously based in Liverpool.

A second doctor who was being questioned in Australia over the failed attacks has been released without charge.

Marwah Dana Asha, 27, who was arrested on the M6, is thought to have worked as a lab technician at an NHS hospital in Shrewsbury.

She was arrested with her husband, Dr Mohammed Asha, 26, who worked at North Staffordshire NHS Trust's University Hospital.

Iraqi doctor Bilal Abdullah, arrested at Glasgow Airport on Saturday, and two men, aged 28 and 25, arrested at accommodation at the Royal Alexandra Hospital in Paisley on Monday have been handed over to the Metropolitan Police. Dr Abdullah was employed as a locum at the hospital.

Khalid Ahmed, detained at Glasgow Airport along with Dr Abdullah, suffered severe burns and remains in a critical condition under armed police guard at the Royal Alexandra.

The man arrested in the Lime Street area of Liverpool trained as a doctor at the Rajiv Gandhi University of Health Sciences in Bangalore, India, the same place as Dr Haneef.

Six of the eight people arrested are now being held at London's Paddington Green police station.

Sian Thomas, deputy director of NHS Employers, said she wanted to reassure the public there were "thorough and robust checks" in place before doctors were employed by NHS trusts.