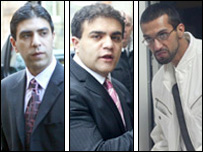 Three men have been jailed for life after they were found guilty of the racially-motivated murder of white Glasgow teenager Kriss Donald.

Kriss's mother Angela - quiet during the trial - shouted: "You bastards," as the jury delivered its verdict. Imran Shahid must serve a minimum of 25 years, Zeeshan Shahid, 23 years minimum and Mushtaq, at least 22 years.

Outside the court, Ms Donald, 42, thanked police, the prosecution and witnesses. She said: "Justice has been done, thank you - it is over."

The six week trial had heard that her son had shouted: "I'm only 15, what have I done?" as he was dragged from the street and into a car. The gang took him on a 200-mile journey to Dundee and back while they made phone calls looking for a house to take him to.

Having no success, they returned to Glasgow and took him to the quiet Clyde Walkway, near Celtic FC's training ground.

There, they held his arms and stabbed him 13 times before dousing him with petrol and setting him alight while he may still have been alive.

The jury of nine women and six men took about eight-and-a-half hours to reach its verdict. Imran Shahid was found guilty by a unanimous verdict and the other two guilty by majority verdicts. Sentencing, Lord Uist described Imran Shahid as "a thug and bully with a sadistic nature not fit to be free in civilised society".

He said Imran Shahid, known as Baldy, was the leader of the expedition. "It was pre-meditated cold blooded execution, it truly was an abomination," Lord Uist added. "The savage and barbaric nature of this crime has rightly shocked the public.

"Racially aggravated violence from whatever quarter will not be tolerated in Scotland." 'Horrendous crime' Eyewitness accounts of the abduction, statements said to have been made by the accused, mobile phone records and forensic evidence against one of the men helped secure the convictions.

Kriss was stabbed 13 times and burns covered 70% of his body. His death triggered an investigation that lasted more than two years and took detectives around Scotland and to Pakistan. Asst Ch Const John Malcolm, of Strathclyde Police said:

"As a force we would like to extend our personal thanks to Kriss's family for their co-operation, support and their understanding as the true nature of this horrendous crime unfolded. "It is also important to acknowledge the support of the broader community. "Everyone came together to support and inform our investigation, and through these actions, the community made it very clear that this sort of violence is unacceptable and will not be tolerated in any community."

Kriss was abducted near his home in a random act of racially motivated revenge by the gang on 15 March, 2004. The Shahid brothers and Mushtaq had fled to Pakistan after murdering him. It was more than a year before they agreed to return and stand trial, after warrants were issued for their arrest.

'Defenceless boy' During the trial, prosecutor Mark Stewart QC described the killing as "an appalling crime of inhumanity against a defenceless boy". Over 27 days, the court heard how Kriss's badly burnt and semi-naked body was found by a cyclist on the secluded Clyde Walkway the morning after he was snatched from the street.

Expert witnesses said they believed the 15-year-old was still alive as his body burned. Another man, Daanish Zahid, 20, is serving a minimum of 17 years for murdering Kriss after he was found guilty at a previous trial.

A fifth man, Zahid Mohammed, 22, served half of a five-year sentence after he admitted he had abducted Kriss. He gave evidence at the trial of the Shahid brothers and Mushtaq. Mr Stewart revealed that all three had criminal records - including serious violence in the case of Huddersfield-born father-of-two Imran Shahid.

He was jailed for four-and-a-half years at the High Court in Glasgow in May 1995 for serious assault and was sentenced to 30 months in February 2003 for assault to danger of life and dangerous driving. Mushtaq's record, mostly for road traffic offences, also includes assaults.