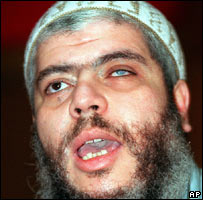 It started as a search for the answer to the riddle of how jailed Islamic cleric Abu Hamza lost his hands.  He has always claimed it was a landmine accident in Afghanistan.

"A mine exploded when I stuck a pole in the ground to mark the edge of what I thought was a safe path,'' he said back in 1998.

Hamza 's claims over his accident are under scrutiny  But a legal contact told me that an infamous jihadi explosives manual said something rather different. It is a document that has already been used in evidence in several terrorism court cases.

So the search began for a copy of the manual, which I am not naming because it can be easy to find on the internet.  It appears for a while before the authorities remove it. It then appears on a new site a few days later.

After two weeks of scouring the web, I tracked it down.  It has a comic appearance. There is a cartoon bomb on the first page, but the contents are much less amusing.  If you have got the desire to do some carnage, some killings, the book is very, very useful for you. Professionally produced and written in English, it is based on a course that used to be led in Afghanistan in the 1990s by Abu Khabaab, an al-Qaeda explosives trainer.

Sidney Alford, an explosives expert who examined the document for the BBC, told me it is full of scientific inaccuracies and mistakes. But he said that some of the formulae would definitely work, of which more later.

Reda Hassaine, a one-time agent for British intelligence, said this kind of online training is now very common among men who want to be terrorists.

"If you do not have a member of your group who went to Afghanistan or Pakistan, or maybe now Iraq, to do the training, you have to rely on the book. If you have got the desire to do some carnage, some killings, the book is very, very useful for you," he said.

If it had been in your hands, your hands would disappear and probably shatter the tissue in your forearms  Sidney AlfordExplosives expert  In the manual's introduction the author says: "You can be confident that all the explosive mixtures have been tested and do actually work very adequately.

After finishing the course, I moved onto another unit for different training, where I met the original developer of this course.  "He informed me that it was several years old, completely out of date and I needed to be updated, which I have been in the process of ever since."

On page 58, I found the answer to the Abu Hamza question. In a section called "Special mixtures" there are instructions on how to make an acid-based explosive, which again I will not name.  At the end of the recipe the author writes: "This liquid is very dangerous. It will explode with a detonator.

It exploded in the hands of Abu Hamza causing him to lose both of his hands. Nobody tries this one anymore as it is too powerful and dangerous."

Explosive test  We asked Sidney Alford to make a version of this explosive under safe conditions. An internationally-renowned expert, he was impressed by how powerful the explosive was. It blew a large hole in a steel plate.

"If it had been in your hands, your hands would disappear and probably shatter the tissue in your forearms. You may well be killed and it would not be good for your eyesight."

We cannot be certain that this is what happened to Hamza but a man who attended the training camps in Afghanistan has confirmed to the BBC that he was also told by a course leader that the cleric lost his hands making explosives.

He says that when he told Abu Hamza that he knew the truth, the hook-handed radical preacher told him never to repeat the story.