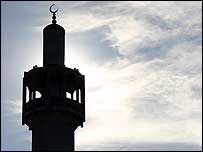 Community relations must be "at the heart of security policy"

British Muslims are being driven into the arms of violent extremists by official attempts to engage with them after the 7 July bombs, a study claims.

Policies since the attacks in London have "driven a wedge" between Muslims and the wider community rather than isolate extremists, the report says.

The study, by think tank Demos, accused ministers of failing to engage Muslims over British foreign policy in Iraq.

It called for "community relations to be at the heart of security policy".  'Resentment and alienation'  The report - partly funded by the Department for Communities and Local Government - described attempts to involve Muslims in the policy-making process as "rushed, conducted on the government's terms, failing to break away from 'the usual suspects', and with little follow through".

Liberal Democrat shadow home secretary, Nick Clegg, said: "There is little to be gained in the long term by providing our security and police services with extra powers to tackle terrorism if, at the same time, the conditions for ever-deeper radicalisation are not being addressed with equal vigour."

The report stated: "In the meeting rooms of Whitehall, ministers were assuring Muslim leaders of the need for partnership, but in press briefings they were talking of the need for Muslims to 'get serious' about terrorism, spy on their children, and put up with inconveniences in the greater good of national security."

It also said that the government' s actions were breeding "resentment and alienation" among Muslims and "playing into the hands of the extremists".

"By viewing Muslims as a single interest group the government has failed to draw a clear enough distinction between angry Muslim opinion and those that would seek to inflict violence and terror," it added.  "The result is that rather than being isolated, extremists are able to attract support from communities cut adrift from mainstream British society."  Foreign policy  The report also said that the Foreign Office, Department for International Development and Ministry of Defence needed to increase the number of staff dedicated to "outreach" with minority communities.

Good community relations is already at the heart of our approach to tackling extremism  Phil WoolasLocal government minister  Rachel Briggs, head of Demos' identity programme, told BBC Radio 4's Today programme, that the think tank is recommending "a quite substantial opening up of the foreign policy-making process".  "The grievances that are felt in some parts of the Muslim community about foreign policy, and especially about Iraq, are pretty cogent and pretty convincing are shared with others outside that community as well," she said.

She added Muslims had told the think tank that during this engagement process some subjects were "off limits" which meant the agenda had been decided before discussions begun.  However, Local Government Minister Phil Woolas said the report was "flawed" and accused Demos of trying to sensationalise the issue.

He said in a statement that it also pre-dated the establishment of the Department for Communities and Local Government which was set up in May to help promote community cohesion.

"Good community relations is already at the heart of our approach to tackling extremism and we are building strong, positive partnerships to isolate and defeat those who are seeking to harm us," he said.

"We therefore reject completely the idea that government actions are breeding resentment and alienating Muslim communities."