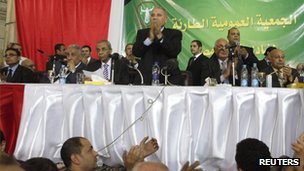 Egypt's judges have called for a nationwide strike in protest against a decree by President Mohammed Mursi granting himself extensive new powers.

After an emergency meeting, the judges union urged Mr Mursi to retract the decree they see as an "unprecedented attack" on the judiciary. Mr Mursi says he wants to protect the revolution.

According to his decree, no authority can revoke presidential decisions.

It includes a bar on dissolving the assembly drawing up a new constitution.

Work on the constitution has been plagued by legal complaints questioning the make-up of the assembly.

Mohammed Mursi became the fifth president of Egypt in June - more than a year after protests that overthrew President Hosni Mubarak.

The Muslim Brotherhood - the Islamist movement that backs Mr Mursi's Freedom and Justice Party (FJP) - has called for demonstrations across Egypt on Sunday, according to state news agency Mena.

The announcement came hours after pro-Mursi demonstrators tried to disrupt the judges' meeting - with opponents supporting the judges.

This could turn into a battle between Islamists on the one side, and, on the other, secularists, liberals, and Christians - so there is even a fear of this turning into a sectarian struggle”

Opposition politician Mohamed ElBaradei said there could be no dialogue with Mr Mursi as long as the decree was in force.

Speaking to reporters, he said he was waiting to see strong condemnation of the move by the international community.

The Judges Club - the union which represents judges throughout the country - called for "the suspension of work in all courts and prosecution administrations" after emergency talks.

It said that Abdel Maguid Mahmoud, prosecutor general since the Mubarak era who was sacked as part of the decree, should be reinstated.

In a statement earlier, the Supreme Judicial Council - Egypt's highest judicial authority - called Mr Mursi's move "an unprecedented attack on the independence of the judiciary and its rulings".

Judges and prosecutors in Egypt's second city Alexandria have already begun a strike, saying they will not return to work until the decree is reversed. 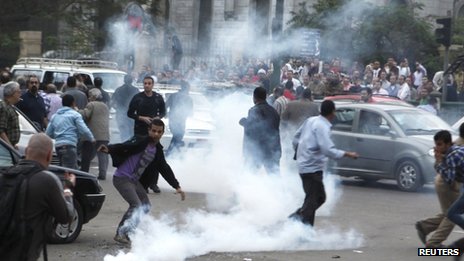 However, another group known as Judges for the Sake of Egypt has backed the decree, according to state TV.

The response of the judges has been tough, if fairly predictable, says the BBC's Jon Leyne in Cairo.

One judge told the BBC their concerns were for Egypt, not their jobs.

"We can't work like this, we have to change it and we will change it," Ahmed Shannan said.

There had been reports that the Supreme Judicial Council was about to disband the constituent assembly for a second time, our correspondent adds, a move that could seriously derail the transition to democracy and further delay new parliamentary elections.

This, in turn, could deter Egypt's political leaders from taking tough decisions while they wait for the vote. 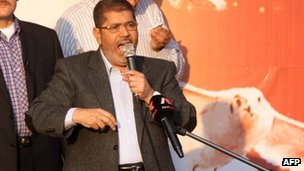 Meanwhile, Egyptian human rights agencies filed a lawsuit at the Court of Administrative Justice calling for the decree to be annulled, Mena news agency reported.

The ruling that triggered the protests bans any challenging of the president's decisions and laws.

Both critics and supporters of Mr Mursi have staged rallies since the decree.

Both sides have planned rival demonstrations for Tuesday.

The US said earlier that Mr Mursi's move had worried in the international community.

"It is very important that the ideals of the revolution are not lost in these times of change, and that President Mursi continues the constitutional process towards democracy, the rule of law and the separation of powers," he said.