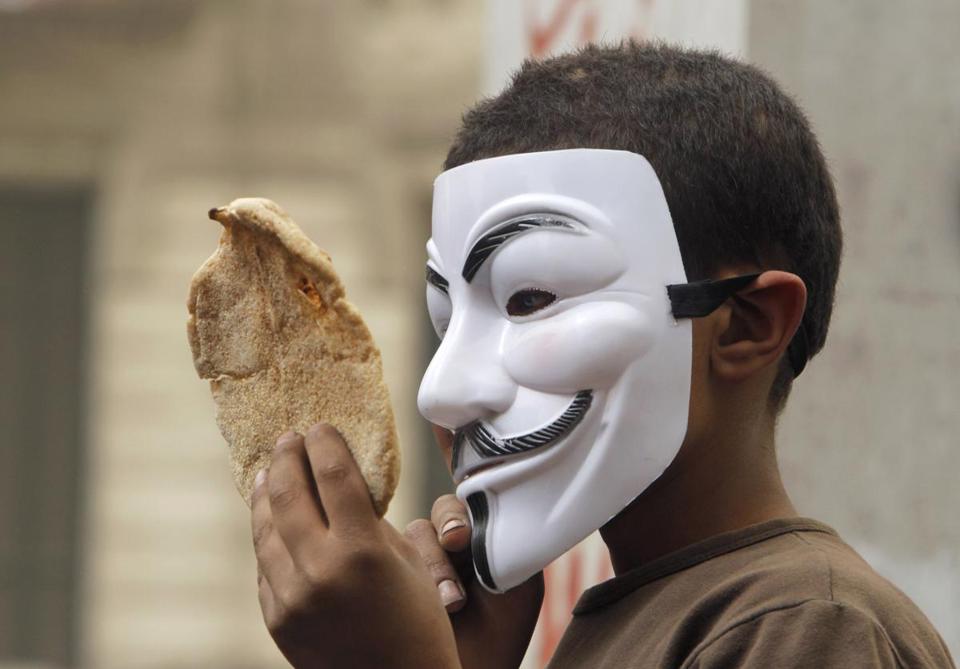 CAIRO (AP) — Egyptian protesters clashed with the president’s Muslim Brotherhood backers and ransacked three offices nationwide Friday as anger over allegations of beatings and power-grabbing boiled over into the largest and most violent demonstrations yet on the doorstep of the powerful group.

Anger erupted a week ago when Brotherhood members beat journalists and liberal and secular activists during a protest outside the group’s Cairo headquarters. Journalists were there to cover a meeting. Protesters demand an apology, but the fundamentalist movement said its guards were provoked and acted in self-defense.

After smaller demonstrations since last weekend outside the headquarters, thousands of activists thronged to the building and battled Brotherhood supporters with bird shot, rocks, knives, sticks and their fists Friday. Gunshots were heard ringing in the neighborhood.

Three Brotherhood offices were ransacked by mobs in another Cairo neighborhood, in the second-largest city of Alexandria and in the Nile Delta city of Muhalla.

Egypt has faced near-constant turmoil in the more than two years since longtime, authoritarian leader Hosni Mubarak was overthrown in a revolt. His successor Mohammed Morsi, the country’s first democratically elected leader, has faced increasing frustration over the slow pace of his efforts to reform the state and fulfill the revolution’s promises of better living standards and justice.

Thousands of policemen, meanwhile, have gone on strike, refusing to confront protesters, and in some provinces, Egyptians have taken to vigilante violence and killings to fight crime. The unrest has badly hurt the economy, with foreign investors and tourists largely staying away, and a diesel crisis that has crippled life for millions.

Morsi’s opponents — led by many of the activists who were at the forefront of the mass protests leading to Mubarak’s ouster — charge that he has done little to improve the country in the nine months since he took office. They accuse the Brotherhood, which rose in power after years of repression under the former secular regime, of seeking to monopolize power, a charge the group denies.

The anti-Brotherhood protesters are demanding the resignation of the attorney general and the interior minister, both presidential appointees. They also accuse the interior minister of authorizing security forces to use excessive force against protesters. More than 70 people have been killed in protests with police since Mohammed Ibrahim was appointed in January.

‘‘Right now, Brotherhood buses are being burnt and there are serious injuries with people in critical condition,’’ he said. ‘‘It is not acceptable that Egyptians watch TV and see this farce taking place as Egyptians fight one another.’’

Young men threw stones wielded tree branches and broken bottles as they chanted against Morsi near the Brotherhood’s headquarters in Cairo. One sign held aloft by a protester outside the headquarters read: ‘‘Who is ruling Egypt?’’

Riot police stood guard around the building but did not interfere to break up the two sides fighting a few blocks away, although they fired tear gas at protesters who approached the headquarters later in the evening.

Black plumes of smoke billowed after protesters torched buses that had ferried Brotherhood members to the site, and security officials said at least 90 people were injured.

Fatima Khalifa, 30, said she was demonstrating to send a message to the Brotherhood that they are the aggressors.

‘‘Morsi must be tried for killings of protesters just like Mubarak,’’ she said.

The Brotherhood spokesman said the group’s headquarters was the wrong place to demand change.

‘‘The protesters’ demands should be delivered to the government and president, not the Brotherhood office because even though the president came from the group, he makes decisions that are separate from the group,’’ Mehres told The Associated Press.

In another Cairo neighborhood, young protesters broke into the Brotherhood party’s office in Manial and stole some items, according to security officials.

In Alexandria, an AP cameraman saw protesters attack the Brotherhood party’s office, leaving with computers, files and other objects. The attack took place near the site where unknown assailants fought protesters demanding the resignation of Morsi, who is a member of the party.

They also torched a Brotherhood office in the Nile Delta city of Mahalla, a security official said.

All security officials spoke on condition of anonymity because they weren’t authorized to release the information.

The scenes were reminiscent of clashes that took place late last year and left 10 people dead outside the presidential palace in Cairo between the two sides. Ten people died in those clashes. More than a dozen Brotherhood offices were torched or ransacked at the time.

The opposition’s demands are wide-ranging, including immediate cessation of violence against protesters and the amendement of articles in the constitution that was passed in a contentious referendum last year. They also want the formation of a more representative and inclusive Cabinet.

The clashes in Cairo erupted at a nearby square after a large pro-Brotherhood march approached the Brotherhood’s main headquarters In the sprawling Cairo neighborhood of Muqattam. The protesters moved a few blocks away to Fountain Square after being hit with rocks from rooftops of nearby buildings. The square lies at the entrance of Muqattam, which overlooks the city.

The Brotherhood’s website also reported the incident, characterizing the anti-Brotherhood side as ‘‘thugs’’ and ‘‘counter-revolutionaries’’.

Ahmed Abdel-Hai rushed one of the injured Brotherhood members to an ambulance.

He said the man was beaten after protesters allegedly saw him firing bird shot.

‘‘Today will be a massacre,’’ he said, as his hands and face were stained with blood from the wounded Brotherhood man, whose face and half naked body were covered with blood and bruises.

Several anti-Brotherhood protesters were also seen bloodied and being rushed to ambulances. Some covered their faces with black masks.

Anti-Brotherhood protester Hussein el-Sayyid said he saw three people with their faces slashed, suggesting some blades or knives were being used in the fighting.

‘‘We are Egyptians eating one another when we should be one hand,’’ he said.