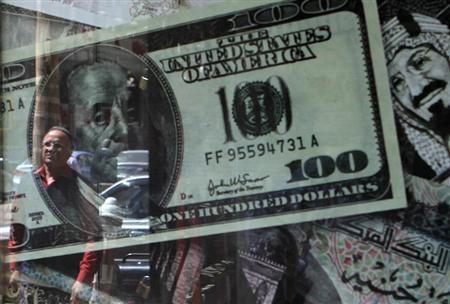 A man is reflected on a door of an exchange bureau in central Cairo, March 25, 2013.

LONDON/CAIRO (Reuters) - Egypt has hit breaking point in its ability to pay for imports of oil, wheat and other basic commodities, forcing it to call in diplomatic favors or seek easy payment terms from suppliers who hope for future advantage in return.

Two years after ousting Hosni Mubarak, new, Islamist leaders are struggling to win a credit line from the IMF as they try to manage the hopes of 84 million people with a depreciating currency and an economy hooked on state subsidies but starved of tourism revenues since the political upheavals began.

Fuel shortages, tighter security at petrol stations and scuffles in the streets are becoming common in Egyptian towns as state importers struggle to meet demand for diesel and gasoline.

Though Egypt's strategic importance means world powers seem unlikely to let its economy collapse, the credit crisis is now so acute that it can no longer buy crude in the market, leaving its oil minister scrambling to cut diplomatic deals with Libya, Qatar and Iraq, to add to an existing oil lifeline from Kuwait.

Fearing especially the unrest that might follow a shortage of subsidized bread, the government may prioritize fuel for the food industry. Richard Mallinson, an analyst at Energy Aspects in London said: "The focus is probably on ensuring farmers get enough diesel ahead of the harvest season and bakeries don't run out of fuel as this could trigger food shortage."

Officials have sought to assuage worries on food, banking on a record wheat crop coming in from next month. But it concedes that fuel supplies are a difficulty:

"The major problem we are facing of course is in the fuel sector," government spokesman Alaa El Hadidi told Reuters. "This is being tackled and there has been gradual improvement."

However, Egypt has not received a crude oil cargo from open market suppliers since January and, with money tight, the state grain buyer has not purchased wheat since February.

International trading houses Petraco and Arcadia were due to deliver crude after winning a tender, but the state importer, Egyptian General Petroleum Corp (EGPC) has cancelled both deliveries, several traders said. As a result, refineries are running well below capacity.

On Thursday, the oil ministry blamed repeated power cuts on a lack of funds to buy fuel for power stations.

Elected last June, President Mohamed Mursi has faced sliding currency reserves, a soaring budget deficit and sometimes violent protests. And all the while, Egypt's choice of suppliers has been eroded as its credit wears thin.

One government official said Cairo was casting around for other sources of commodities, and of finance for them:

"We are now open to other possibilities and our priority will be to serve our country's interest and seek the country that gives us the best financial facilities and this could also mean that we are opening up to other markets, including Arab states," the official said.

Egypt currently survives, hand to mouth, with funds arriving from Turkey, Iraq, most recently Libya and, most generously, $5 billion in loans from the ambitious Gulf emirate of Qatar.

"It looks like Egypt is running on a Qatari life support machine," the head of a major international commodities trading house said. "But that cannot last forever."

Crucial for the future is the $4.8-billion deal Egypt is seeking with the International Monetary Fund and a reduction in massive fuel subsidies, which eat up a fifth of state spending.

However, the government fears the domestic backlash subsidy reform would cause and seeks gentler terms.

While crude oil purchases have been interrupted, Egypt is still managing to buy oil products, like diesel, on the market - but lines of tankers waiting to deliver are common at Egyptian ports as sellers wait for delayed payments before offloading.

The only foreign crude Egypt has consistently imported is from Kuwait, industry sources said, under a deal signed a year or two before Mubarak fell and which gives Cairo nine months credit - three times as long the normal industry payment terms.

Compounding its fuel problems, Egypt's own gas exports have sunk over the last year. The country's production is falling, due to years of poor investment terms worsened by the crisis.

State gas firm Egas has been in talks since the end of last year to secure natural gas imports from Qatar after agreeing to import Algerian gas in October.

A source familiar with the talks said they are problematic, since Egypt is asking for a price - $4-5 mm Btu - that is less than a third of what Qatar can get today for its gas in Asia.

Egypt is the world's biggest wheat importer, buying around 10 million metric tons a year, but state purchases since January have fallen to less than a quarter of the same period last year.

Stocks are at dramatically low levels, with a cabinet report on Wednesday showing the country now holds 2.116 million metric tons of the grain from international and local markets, enough to last 85 days.

Supply minister Bassem Ouda was quoted in the Financial Times as saying he expected U.S. and European exporters to provide "easy terms" as it seeks to replenish falling stocks.

Holding out the prospect of future benefits for suppliers who show understanding now for Cairo's predicament, he said it would buy from "whoever gives us payment facilities and treats Egypt like a major country in the region".

"Whoever does not help Egypt through the current difficult period, we are not prepared to help them market their products," Ouda added. "We expect our friends in the U.S. and Europe to give us easy terms against our buying their wheat."

Among those outside Egypt's normal circle of suppliers, India's trade minister has said New Delhi is talking to Cairo about selling wheat, but no details have been hammered out. Traders are skeptical on the prospect of such a deal, since Indian wheat quality is below what Egypt normally accepts.

The biggest Arab nation, inheritor of a key Middle East peace treaty with Israel and guardian of the Suez Canal, a vital artery for global trade, Egypt can look to the world's major powers to help keep it from chaos. The United States gives more than $1 billion in annual military aid alone to Cairo.

But for now the government finds itself juggling day-to-day to keep long-standing channels open for its imports.