15 Men charged after raids on passports factories in UK 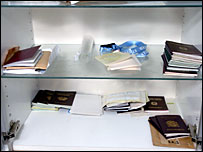 More than 100 officers were involved in Wednesday's dawn raids across London, in which 13 addresses were searched.