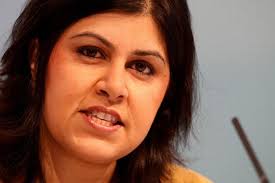 Christianity is threatened by extinction in some parts of the world where Christian communities are persecuted because they are a minority, a Government minister has warned.

Christians are being driven out in regions such as Syria and Iraq, places where the religion first took root, Baroness Warsi said.

She used a speech at Georgetown University in Washington DC to express her concerns that Christians were being persecuted and called for a "cross-faith, cross-continent" response to the problem

Lady Warsi, who has responsibility for faith communities, called on politicians in countries such as Pakistan to "set the tone" for tolerance towards religious minorities

She told the BBC Radio 4 Today programme she was concerned that the parts of the world where Christianity first spread is now seeing large sections of the Christian community leaving and those that are remaining feeling oppressed.

"There are huge advantages to having pluralistic societies - everything from the economy to the way people develop educationally, and therefore we all have an interest in making sure that Christian communities do continue to feel that they belong and are not persecuted in the places where this religion was born", she said.

In some cases, Christians are targeted for "collective punishment" by majority groups in retaliation for what they perceive as the injustices committed by Western powers, she added.

"This concept of collective punishment and them being seen as agents of the West or agents of regimes is wrong", she argued. "We need to speak out and raise this with the countries where this is happening."

The Foreign Office minister said she had already had "very frank conversations" with ministers in Pakistan, telling them senior politicians have a "duty" to speak out against persecution and set a standard for tolerance. Some 83 per cent of countries have constitutions guaranteeing freedom of religion, but do not implement these provisions, she said.

"There is much more that we can do," said Lady Warsi. "There's an international consensus, in the form of a Human Rights Council resolution on the treatment of minorities and tolerance towards other faiths. But we need to build political will behind that.

"Of course there have been moments when religious communities have been in conflict, but there have also been great moments of co-existence between faiths. There isn't an intrinsic clash between different faiths.

Asked whether Lady Warsi's warning of the possible extinction of some Christian communities was correct, the leader of Catholics in England and Wales, Archbishop of Westminster Vincent Nichols, told Today: "I think in some parts of the Middle East that is probably true".

He said there were "real challenges" for Christians living in this part of the world "to support and get alongside them and also for politicians to understand that the presence of Christians is a great mediating factor, often for example between different segments of Islam".