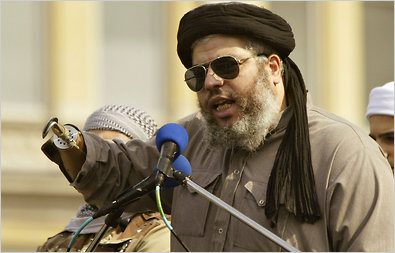 NEW YORK -- Abu Hamza al-Masri, the radical Islamic cleric who was extradited from the UK to the US in 2012, has been found guilty of terror-related charges by a federal court in New York. The verdict, reached after a four-week trial in Manhattan, means the cleric is likely to spend the rest of his life in a maximum security prison.

After two days of deliberation, the jury found Hamza, who was born Mustafa Kamel Mustafa, guilty on 11 counts, including planning to establish a jihad training camp in Oregon, conspiring to kidnap Americans in Yemen, facilitating violent jihad in Afghanistan and suppling the Taliban with goods and services.

Former Home Secretary David Blunkett said the verdict justified the lengthy legal battle surrounding Hamza's extradition. "This has been a very long journey to obtain justice, and to ensure that someone who has been so adept at avoiding the just penalty for his extensive activities is at last being brought to book," said Blunkett. "The verdict justifies the extensive measures over many years to ensure through his extradition that he should pay for the misery he brought to others."

Hamza, who was born in Egypt in 1958, suffered injuries to his hands and eye in Afghanistan where he travelled to fight against the Soviet invasion. During the trial, the prosecution portrayed Hamza to be a terrorist trainer, with the defense arguing he was a man with strong views but not a criminal.

During the trial, Hamza proclaimed his love for Osama bin Laden, reiterating his belief in the validity of the 9/11 attacks. He was also shown on video giving sermons on why non-Muslims should be treated like "cows and pigs". However, the cleric insisted that he did not take part in any terror-related activity, with his defence lawyer Joshua Dratel telling the jury that these were "expressions, not crimes".

Assistant US attorney Ian McGinley argued that the jury should look beyond Hamza's lies, highlighting four European tourists that died in 1998 in Yemen by kidnappers who had a satellite phone supplied by Hamza. "Don't let the passage of time diminish what he did," McGinley told the jury.

The cleric travelled to Britain the early Eighties, after which he met Valerie Fleming, an English woman whom he married, gaining British citizenship in the process. He divorced her a few years later.

Despite having worked as a bouncer in a Soho nightclub and with a reputation for socialising and heavy drinking in the mid-1980s, Hamza slowly turned towards religious fundamentalism, and in 2006 he was jailed in the UK for seven years for soliciting murder.

The cleric, who preached at the infamous Finsbury Park Mosque once attended by "shoe bomber" Richard Reid and 9/11 conspirator Zacarias Moussaoui, was originally indicted on terror charges in 2004 however was only extradited to the US after a protracted legal battle.