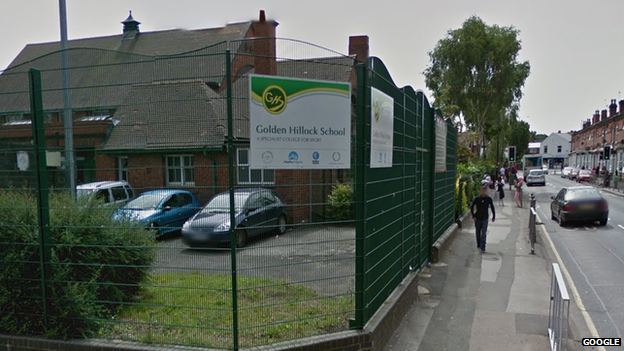 Golden Hillock School is among 25 Birmingham schools under investigation

Pupils are not being protected from extremist views at a Birmingham school named in the Trojan Horse inquiry, according to leaked Ofsted reports.

Golden Hillock School in Sparkhill was described as inadequate by inspectors.

Another leaked report claims the governing body at Saltley School "paid private investigators to interrogate the emails of senior staff".

Ofsted began inspections after claims that hardline Muslims were trying to take over Birmingham schools.

The Ofsted reports make absolutely no suggestion, nor did they find any evidence, that Golden Hillock either promotes or tolerates extremism ”

The inquiry has sparked a government row in Cabinet between ministers about how extremism in schools is handled.

A statement from Golden Hillock said it wholeheartedly disputed the validity of the inspection, one of 21 being carried out in Birmingham.

These were to be published together by Ofsted - but details have already emerged.

Six Birmingham schools are expected to be put into special measures following the inspections ordered by the Department for Education.

They were sparked by an unverified, anonymous letter that set out a strategy for a group of hard-line Muslims to install sympathetic staff and governors in Birmingham schools.

In the Golden Hillock report, Ofsted said: "Too little is done to keep students safe from the risks associated with extremist views."

Inspectors concluded leaders and governors were "not doing enough to mitigate against cultural isolation" and this "could leave students vulnerable to the risk of marginalisation from wider British society and the associated risks which could include radicalisation."

Parents in Birmingham must be wondering how everyone else seems to have these "Trojan Horse" inspection reports when they are still kept in the dark.

This latest leak shows Golden Hillock school, part of the Park View academy chain, to be inadequate and failing to "keep students safe from the risks associated with extremist views".

It doesn't say there is extremism, but that there is a lack of awareness about preventing it.

Another leaked report shows that Saltley School is inadequate in all categories.

It highlights poor governance, a "state of crisis" and some staff feeling "intimidated". But there are no findings of extremism.

These are damning reports - but parents of children at the schools are still not able to see them.

Head teachers' leaders have called on Ofsted to publish all 21 reports immediately, attacking the "fear and confusion" caused by the delay.

But the Trojan Horse claims are part of a widening political battle. Who is going to be blamed for the weaknesses in oversight? The Department for Education, local council or inspectors?

In this strange story, the chair of the academy trust running Golden Hillock is himself an Ofsted inspector.

And there will be questions about how schools, recently found to be good or outstanding, have now been found to have so many problems.

However, the report praised the behaviour of students and their eagerness to learn, despite quality of teaching and leadership being branded inadequate at the school, which is sponsored by the Park View Academy Trust.

Inspectors had rated it as requiring improvement in February 2013, before it became an academy last October.

A statement from the school said it would be challenging the Ofsted findings.

"Ofsted judges that Golden Hillock is not doing enough to raise students' awareness of the 'risks of extremism'," it said.

"However, it is crucial to note that the Ofsted reports make absolutely no suggestion, nor did they find any evidence, that Golden Hillock either promotes or tolerates extremism or radicalisation.

"The trust accepts that there is room for improvement at its schools, but categorically does not accept that Golden Hillock School is inadequate."

One parent, who did not want to be named, said: "My kids are happy, the progress they are making is good. I don't know how Ofsted can say this a failing school.

"I think the government are scared that all the governors are Muslim and that they have a right to change things at the school, but if you look around it's all Asian communities so it's always going to be mainly an Asian school."

Park View Educational Trust, which oversees the school, said it was not happy with the inspectors' verdict.

"On behalf of the staff, students and parents who have worked so hard to improve their school, we are extremely disappointed to confirm that Ofsted has decided to place Golden Hillock in Special Measures," it said in a statement.

Shadow Education Secretary Tristram Hunt described the report as "very worrying" and said the culture of isolation and marginalisation was exactly what a senior head teacher had warned the Department for Education about in 2010.

"It is right that these issues are investigated but this report offers up more questions than answers which have to be put to Ofsted," he said.

Saltley School in Bordesley Green was criticised by inspectors for inadequate governance - with governors accused of failing to recognise a "state of crisis".

They are criticised for interfering in the running of the school and spending unnecessarily on consultants and lawyers.

"Some staff feel intimidated by their colleagues and feel that they cannot talk freely," says the Ofsted report, which rated the school inadequate.

A Department for Education spokesperson said: "The allegations made in relation to some schools in Birmingham are very serious and we are investigating all evidence put to us in conjunction with Ofsted, Birmingham City Council and the police.

"It is absolutely vital these investigations are carried out impartially, without pre-judgment.

"Ofsted has inspected a number of schools in the light of recent allegations and will report to the Secretary of State shortly.

"Retired senior police officer Peter Clarke has been asked by the Secretary of State to make a full enquiry into Birmingham schools and will report back this summer.

"It would be inappropriate to comment further at this stage."

More on This Story