Cardiff Jihadist 'willing to die' for Isis fight in Syria 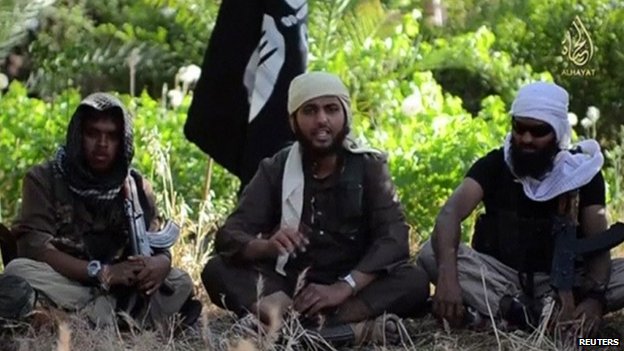 A man believed to be one of three people from Cardiff who have joined a jihadist group in Syria has said he is willing to die for the cause.

Aseel Muthana, 17, left Britain in February to join his older brother Nasser in the country and says he has no plans to return.

In an online conversation with BBC Wales he described seeing "martyrs" to militant group Isis's cause.

He told the Week in Week Out programme: "Jihad is obligatory."

A video, thought to be filmed in Syria, showing Aseel's brother Nasser Muthana and Reyaad Khan, both 20 and from Cardiff, appeared online two weeks ago.

The pair, who appeared along with a man from Aberdeen, urge others to join the Isis (Islamic State in Iraq and the Levant) fight in the country.

Nasser's brother Aseel Muthana, has also joined jihadists abroad, and a man, believed to be him, has told Week in Week Out about life on the front line.

Asked if he had any regrets about leaving the UK and about how far he was prepared to go for his cause, he replied: "Nope, I can say I am willing to die but Allah knows the truth behind the words."

He described making new friends with other British jihadists who had travelled to Syria to join Isis fighters.

Aseel said there were "loads" of other men from Britain who have also joined up.

Asked how he could defend the brutality of Isis killings in Syria, he said he stood by Sharia law and was glad to be out there.

And when asked if he was concerned about what people in the UK might think of him, he replied: "Not really."

He was then asked whether he realised he would be arrested if he returned to the UK, and he replied: "Yes, most probably." 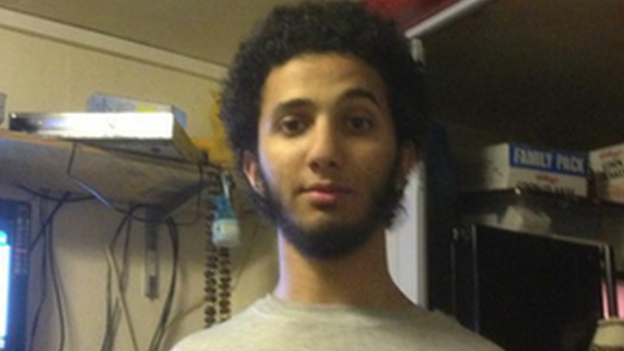 Aseel told the BBC that when his brother, Naseer, left his family was devastated.

The teenager initially thought it was enough for one to go for Jihad, but eventually he decided to go "to serve Allah".

The programme also discovered other social media accounts, believed to be those of Aseel Muthana's brother Nasser and his friend Reyaad Khan.

Both appear to be commenting on extreme violence.

The programme has done all it can to verify that it is the men, but cannot be 100% certain.

The men refuse to answer certain questions, worried about being identified, but in a series of comments both referred to appearing in the Isis video.

The account, believed to belong to Nasser Muthana, mocked the publicity which followed the release of the Isis video, gave a graphic account of a battle and referred to beheadings.

Another message posted on the same account showed a weapon said to have been taken from an enemy of Isis.

It said: "Look what we found… glad tidings we'll make sure his head is detachable."

Comments on a social media account, believed to be that of Reyaad Khan, include graphic references to the killing of a number of people.

A photograph of the killings, understood to have been carried out by Isis, was posted on the same account.

Another post describes how a spy was caught trying to plant a microchip in a house, adding "...we sent him to his Lord".

The comments made online by the three men also appear to be celebrating the caliphate announced by Isis on Sunday.

The father of the brothers, Ahmed Muthana, told the programme he was deeply disappointed in his sons and wants them to come home to face justice.

Mohammed Islam, a close friend of Reyaad Khan, said his family would be "shocked" and "horrified" by the comments he appears to have made online, and urged him to return home. 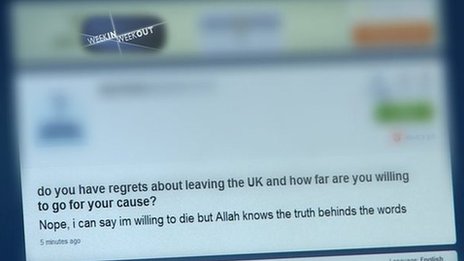 Another of the online messages exchanged

The men are believed to be among 500 Britons fighting in Syria for Isis.

Terrorist organisation ISIS is banned under UK law. It is illegal for British citizens to fight for the cause in Syria.

Last week the head of Wales' counter-terrorism unit denied police were failing in their efforts to combat the radicalisation of young Muslims.

South Wales Police Assistant Chief Constable Nikki Holland said police could not "keep a hold of everybody", but said she did not think Cardiff had any greater problem than anywhere else in the UK.

Her comments come after Nasser Muthana father, Ahmed Muthana, claimed police had failed to win the trust of Welsh Muslims.

Speaking after the footage first emerged, he told the BBC he was "heartbroken" by the video featuring his son, while the family of Mr Khan said he had been "brainwashed" into supporting violent extremism.

Watch Week In Week Out: Journey to Jihad on Wednesday, 2 July at 22.35 BST on BBC One Wales