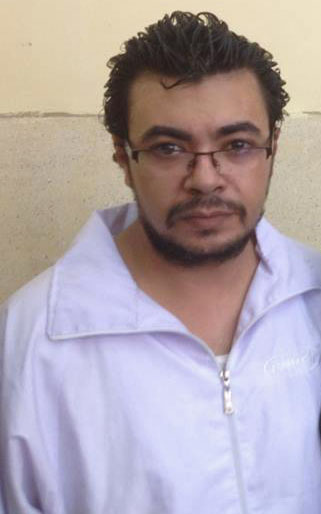 A noted convert in Egypt released on bail this week for the appeal of his disputed conviction for “inciting sectarian violence” was quickly imprisoned again on equally controversial charges from 2009 of “defaming Islam,” his attorney said.

Local security officials on Monday (July 21) turned Bishoy Armia Boulous, previously known as Mohammed Hegazy, over to the Ministry of Interior to face the blasphemy charges filed five years ago.

In 2009 two lawyers supported by a group of Islamists charged him with defaming Islam after he filed what became a very public lawsuit to force the Egyptian government’s Ministry of Interior to change the religious affiliation listed on his state-mandated national identification card from Muslim to Christian.


The blasphemy charges effectively amount to a charge of apostasy because his accusers said the very act of leaving Islam alone cast the religion into ill repute. Boulous, now 31, left Islam when he was 16 years old.

Karam Ghobriel, one of Boulous’ attorneys, told Morning Star News that the Ministry of Interior has charged Boulous with violating Article 98f, defaming a revealed religion, and violating Article 161, perverting a holy book or ridiculing a religious celebration. He has also been charged with two counts of violating Article 102, inciting public sedition.

The charges against Boulous were unexpected, Ghobriel said. On Tuesday (July 22), when he learned of the charges, Ghobriel was waiting for final confirmation that Boulous had been released from prison on appeal for the June 18 conviction for “inciting sectarian violence.”

“It’s very obvious because he’s a convert that they wanted to keep him in prison,” Ghobriel said.

On Dec. 4, 2013, security forces arrested Boulous at a cafe in Minya, 260 kilometers (161 miles) south of Cairo, with a camera and four flash drives. Officials claimed Boulous was working for The Way TV, a Coptic Christian-owned, U.S.-based religious television channel that broadcasts into Egypt via satellite, and was contributing to a “false image” that there was violence against Christians in Minya.

At the time of his arrest, Christians in Minya had suffered numerous, well-documented public kidnappings, assaults and destruction of property, including attacks on several church buildings that mobs of militant Muslims burned to the ground.

Whether Boulous was actually working for The Way TV is still in dispute.

In the June 18 conviction, a judge sentenced Boulous to five years in prison and levied a fine of 500 Egyptian pounds (US$70) for what he called “disturbing the peace by broadcasting false information.” Boulous’ attorneys immediately filed for the right to appeal, which was granted, with the first court hearing set for July 20.

Because the original judge in Boulous’ most recent case set no bail as required during an appeal, Ghobriel filed a complaint, and an appeals judge on Sunday (July 20) ordered that Boulous be released. In the 24 hours that prosecutors had to comply with the judge’s order, security officials from the Interior Ministry took Boulous into custody to be interrogated in Cairo.

“He is still being mistreated badly by the officers,” Ghobriel said, adding that his client had been beaten while in the custody of Interior Ministry security officials, formerly known as the State Security Investigation (SSI) unit. “They told me, ‘We’re going to show him’ because of his faith.”

Religious freedom is guaranteed under Egyptian law but is limited by various interpretations of sharia (Islamic law), which can override national law. While it is easy and even encouraged for someone in Egypt to convert to Islam, it is impossible for a Muslim to legally convert to Christianity.

According to Egyptian law, every citizen age 16 or older must carry a state-issued ID card. The card is necessary for anyone who wants to open a bank account, enroll children in school or start a business, among other activities. Religious identity also determines many of the civil laws to which one is subject.

On Aug. 2, 2007, Boulous filed his lawsuit with the help of Mamdouh Nakhla, founder and lead counsel of the Kalema Center for Human Rights. He filed the case, Boulous said in 2007, mainly to protect his soon-to-be-born child from being forced to suffer the same persecution he experienced.

Within less than a week of filing the 2007 suit, Nakhla dropped out of the case due to death threats from numerous figures, including members of the SSI. Several well-known sheiks called for the death of Boulous, and he and his wife were forced into hiding.

As the case continued, Boulous’ home was set on fire, he was arrested, and several times SSI officials beat him while in custody. During this time in 2009, lawyers Mohammed Fathy Al-Shaheedy and Mohammad Adly Kadry filed the defamation charges against Boulous.

In April 2010, Boulous essentially lost his case when an appeals court suspended it indefinitely in order to wait for the country’s constitutional court to rule on a previous case dealing with religious identity. But before that case could be resolved, the 2011 revolution happened, a government was forced out in military-backed popular coup and two constitutions were written and voted on by referendum.

Boulous’ notoriety seemed to get lost in all the other issues Egypt was facing, and he came out of hiding and even participated in events at Tahrir Square during the 2011 Revolution. Ghobriel said that part of the reason he was surprised about the blasphemy suit against Boulous is that it is two years past the three-year statute of limitations for those types of cases.

The lawyer that prosecuted Boulous on charges of inciting sectarian strife, however, told Ghobriel that he considers Boulous a “runaway criminal.”

Ghobriel said that even in the face of everything that has happened to Boulous, “his faith is getting stronger, and he feels God is giving him strength.”

A hearing on the appeal of the conviction for “inciting sectarian violence” is scheduled for Nov. 11.