Palestinian Church Forced Out of Building in East Jerusalem, Israel

Pastor has lost other worship sites to Islamist antagonists. 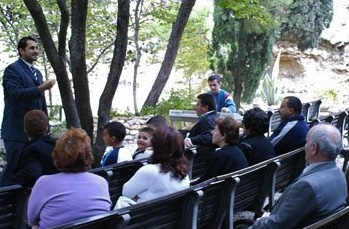 ISTANBUL, August 28, 2014 (Morning Star News) – Seven years of harassment and attacks by hard-line Muslims have finally forced a Palestinian church in East Jerusalem out of their building, church leaders said.

The congregation of Calvary Baptist Church, under Holy Land Missions, moved out of their building in the Shofat area of Jerusalem in July after Islamists threatened their landlord. They are looking for a safer, more permanent place to meet.

Pastor Steven Khoury said he was emotionally torn when he handed over the keys. The persecution was difficult but had also been a catalyst for spiritual development, he said.

“It was very emotional, because a lot of our people really started to grow there,” he said. “Most of the growth happened in Shofat because of the persecution.”

The persecution started almost immediately after the congregation moved into the building in a predominantly Muslim area in 2007.

Within 10 days of starting meetings and worship services, a Muslim who lived close to the church building attacked a member with a knife. Then someone tried to set the building on fire, likely with a Molotov cocktail, Khoury said.

“It only burned a few of our playground sets and didn’t reach the building,” he said.

Next came the vandalism – first cars parked at the church building were damaged, then the property, and finally there were physical attacks on children coming to church gatherings.

“These were all spread out over a two- or three-year period, to let us know that we were not welcome there,” Khoury said.

When the local government accepted a request in late 2008 to put up a road sign identifying the location of the church building, things “really escalated,” Khoury said.

Eventually the landlord succumbed to the pressure, and the 110-member congregation had to leave the building.

The departure last month was not the first time Muslims angry about their activities have forced the Jerusalem congregation to leave a building they were using for ministry. It has happened twice before.

In 2006, Holy Land Missions had to leave a building in the Beit Hanina area of East Jerusalem, which, like Shofat, is a Muslim-majority area. In 2004, when the group rented the building, church vehicles were vandalized, a sign identifying the church was torn down twice and the building was subjected to repeated vandalism and break-ins, Khoury said. By comparison, Khoury doesn’t remember any other building near the church property being vandalized.

Especially disheartening to the congregation was the response they received from clergy of “traditional” Christian denominations such as the Greek Orthodox and Armenian Orthodox.

“Some of those [pressures] in the community were from traditional Christians, believe it or not,” he said. “Traditional Christians did not want us there. They said, ‘You guys are not Christians. What Christianity do you represent? If you’re not an official church, then God doesn’t hear your prayers.’”

A well-known phenomenon in the Middle East rarely discussed openly, centuries-old churches accuse evangelical Christians of “sheep stealing” when they arrive to establish churches. Paradoxically, hard-line Muslims tend to be more tolerant of the ancient churches because of the perception that they do not engage in evangelism, whereas evangelical denominations, by definition, actively spread the message of Christ. Any missionary activity brings them into direct conflict with Muslims.

Eventually the landlord of the Beit Hanina building began receiving threats from his fellow Muslims, and the church had to leave after only two years.

Paying the Price
The Beit Hanina congregation was Khoury’s second attempt to plant a church in Jerusalem.

When he was an adolescent his father, a convert from Islam and a pastor, ministered in East Jerusalem and Bethlehem. During that time, Khoury’s uncle, George Khoury, showed the need for a church in East Jerusalem. He would also display the power that a church body can have on people’s lives, changing young Khoury’s life forever.

In the mid-1990s, George Khoury was a stocky, 6-foot-6 man known to be a trouble-maker with anger issues. He was also a Muslim. Young Khoury’s father invited him to a three-day prayer conference.

“When we invited him, the first thing he said to us is, ‘Will there be free food?’” Khoury said. “At the end of the three-day conference, my Uncle George – big man, tall guy, anger problems, liked very few people and very few people liked him because he was just a trouble-maker – on the third day of the conference in the Sea of Galilee, he accepted Christ as his personal savior.”

On the way back from the conference, George Khoury made an abrupt announcement:  “We need to have this in Jerusalem.”

“When he said, ‘We need to have this,’ what he meant was that he wanted the fellowship, the Bible and the spiritual growth,” Khoury said. “He wanted that, he just didn’t know the lingo for it was called ‘church.’”

Khoury said about two years passed, and his uncle quickly became a different man. He was the inspiration for the church established by the elder Khoury in Wadi al-Joz in East Jerusalem. His favorite Bible verse was Matthew 16:25, “For whosoever will save his life shall lose it, and whosoever will lose his life for my sake shall find it.”

The verse became prophetic when a neighbor began frantically knocking on George Khoury’s door as he sat in his house one night. Some Muslims in Wadi al-Joz were trying to take an elderly man’s house from him by force. George Khoury took him into his house to protect him, and then walked outside to face the group of Muslims and stop the attack. It was the last thing he would do.

“He barely walked outside his doorstep, and the same men that were attacking, chasing after the old man, saw my uncle walk out onto his doorstep,” Khoury said. “In our culture, when somebody ‘walks out’ – when you take somebody’s place – you’re basically responsible for that man’s life, and Uncle George was beaten to death with a metal rod by these men.”

He added, “When they were beating him, they were saying, ‘It’s okay, he’s a Christian.”

The elderly man survived the attack. Many years later, when he could talk about what happened, he told Khoury that his uncle had more peace in him that all those who killed him. When he died, the elderly man told Khoury, “The peace of Christ was upon his face.”

The Wadi al-Joz congregation rented a building to use as a church but was forced to leave it as well because of persecution.

“It was always being targeted for break-ins. We had multiple, a minimum of 10 break-ins,” Khoury said. “We were always being cut with glass because people would throw glass bottles inside the garden area. We’d fall and scrape our legs over the glass bottles and everything, but that was the reality of that church setting there.”

When the Wadi al-Joz congregation left the building, members tried to set up house churches but quickly found that didn’t work, Khoury said. Whereas converts and other Christians could go to a church building with some degree of safety and anonymity, it was nearly impossible to meet unnoticed in a house church because of the small, tightly knit community that defines Palestinian society.

“They did home meetings for a while, then that started to cause problems for people because many people live in apartment buildings, and the majority of the Arab community in Jerusalem, whether they be in the Old City or outside the Old City, are Muslim,” Khoury said. “So if you’re a Christian living in an apartment or you’re a Muslim who has received Christ, it’s going to be very dangerous for you to do worship – music and Bible teachings in your apartment. It became a struggle. It became a difficult thing to do because of threats and danger issues.”

Some of the original Wadi al-Joz members later joined other “above-ground” churches. Others left the country because of political problems and violence.

As a temporary measure, the Shofat church rents a meeting hall for a few hours, two times a week. They found a multi-story building they would like to buy for $3.5 million. The price of the building is high because of the incredibly competitive real estate market in Jerusalem, Khoury said.

“Because Jerusalem is the most sought-after city in the world by the three major religions in the world and land is so scarce, Jerusalem is one of the most expensive real estate markets in the world,” he said. “We can’t get a loan because we don’t own anything in Israel. By faith we are asking the Lord to help us raise $3.5 million. We’ve been able to raise about $700,000 so far.”

In spite of all that happened to him and his congregation, Khoury said they are determined to stay in Jerusalem and do what he feels God has called them to do.