Canadian soldier killed by convert to Islam in hit and run 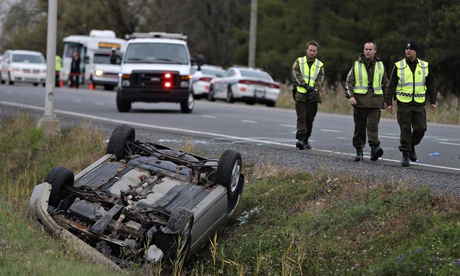 Terrorist ideology inspired a recent convert to Islam to drive his car into two Canadian soldiers, killing one, before he was shot dead by police, authorities said on Tuesday.

Quebec police spokesman Guy Lapointe said the act was deliberate and that one of the two soldiers was in uniform. There were no other suspects.

Public safety minister Steven Blaney called it a “terrible act of violence against our country, against our military and against our values” that was “clearly linked to terrorist ideology”.

The suspect, Martin Couture Rouleau, 25, was known to authorities and recently had his passport seized, police commissioner Bob Paulson said.

“He was part of our investigative efforts to try and identify those people who might commit a criminal act travelling abroad for terrorist purposes,” Paulson said.

Paulson said he was one of 90 suspected extremists in the country who intend to join fights abroad or who have returned to Canada.

There was no answer at Rouleau’s single story white brick home in Saint-Jean-sur-Richelieu, Quebec, on Tuesday morning, and no sign of police.

Neighbour Daniel Fortin said he had known Rouleau, who lived with his father, since he was a child. Fortin said over the past year or so Rouleau grew out his beard and began wearing loose-fitting Muslim clothing but that he never felt threatened by him.

Fortin said Roleau’s father was worried as he became increasingly radicalised and “tried everything,” to help him.

Another neighbour, who declined to be named, said she didn’t know the family well but saw police visit the home on more than one occasion over the past few months.

Lapointe said the suspect was sitting in his car outside a veterans’ support centre for at least two hours before the hit and run. He said a police officer on patrol witnessed what happened.

The suspect was pursued by police for about 2.5 miles (4km) before he lost control of his car, which rolled over several times. Lapointe said the man was brandishing a knife when he emerged from the vehicle. Police then opened fire.

Lapointe said the other military victim is in a stable condition with minor injuries.

The Islamic State group has urged supporters to carry out attacks against Western countries, including Canada, that are participating in the US-led coalition fighting the militants who have taken over large swaths of territory in Iraq and Syria. Six Canadian fighter jets are set to depart for the region soon. It was not known whether the suspect in the Quebec attack had any ties to Islamic militant groups.