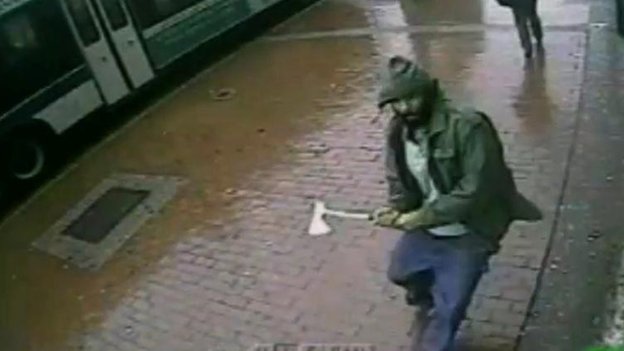 Zale Thompson approaches the officers in Queens, in a photo released by New York police

Police in New York say an axe attack on two officers was a terrorist act carried out by a radicalised Muslim convert.

Zale Thompson, 32, was shot dead after wounding the two officers, one critically, in Queens on Thursday.

Commissioner William Bratton said Thompson was not on any watch lists but had browsed al-Qaeda web sites and watched beheadings.

A bystander shot in the incident is critical but stable in hospital.

Witnesses said the man deliberately targeted the foot-patrol officers, charging them and then swinging the axe two-handed,

He said of the attacker: "We believe that he acted alone, that we would describe him as self-radicalised."

Mr Bratton said Thompson's father had said his son had "spent extensive amounts of time by himself in his bedroom and by all accounts, was a true proverbial loner".

Thompson had served in the US Navy.

In recent social media postings, he spoke of injustices in US society and abroad, but did not indicate any affiliation with a terrorist group.