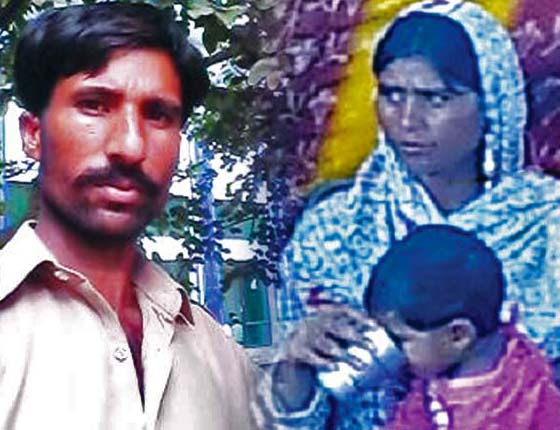 Living on the premises of the brick kiln where she worked in Chak 59 village near Kot Radha Kishan, Karur District, about 60 kilometers (37 miles) southwest of Lahore, Shama Bibi was beaten to death before the enraged mob threw her body into the kiln, a relative said. The 28-year-old mother of four children was five months pregnant.

The relative told Morning Star News that her husband, Shahzad Masih, was also beaten but was still alive when he was thrown into the kiln with his wife’s body. He was 32.

On Sunday (Nov. 2), Shama was cleaning her quarters when she found amulets of her late father-in-law, who had used them in the practice black magic.

“Shama burned the amulets and some other related material, assuming that this was the best way to get rid of ‘evil stuff,’” the relative said. “She later threw the ashes on a garbage heap outside their quarters when Muhammad Irfan, a Muslim co-worker, noticed some half-burnt pieces of paper from the amulets and raised a clamor, claiming that Shahzad’s family had desecrated Quranic pages.”

The kiln is owned by a Muslim, Chaudhry Yousaf Gujjar. On Monday (Nov. 3), announcements emanated from village mosques calling on “all faithful” to take notice of the alleged blasphemy committed by Shama. The announcements panicked the five Christian brothers of Masih – who also worked at the kiln – and their families, but Gujjar assured them that he would handle the situation.

“At around 7 a.m. on Tuesday, a mob of about 3,000-4,000 people, most of whom were armed with batons and sharp-edged weapons, started gathering around the brick kiln,” the relative said, based on information from another relative who witnessed the entire crime.

“The kiln’s manager, Muhammad Akram, asked the couple to hide in a room next to the office and told them to lock the door from inside while he put a padlock on the outside. Sensing the imminent danger to their lives, Shahzad’s brothers and all male children fled the kiln, leaving behind the women and little children in the quarters thinking that the mob, which was baying for the blood of Shahzad and his wife, would not hurt them.”

The mob forced their way into the quarters and started searching for the couple. Unable to locate them, the crowd rushed towards the office and demanded that the manager reveal their whereabouts.

“We are not sure if Akram gave away the couple, but according to [the other relative], the mob broke into the room and then dragged both of them out to the courtyard,” the relative said. “The mob then mercilessly beat up Shama and Shahzad, using fists, kicks and batons at will. [The other relative] said Shama was already dead by the time the Islamist zealots had thrown her body into the kiln. Shahzad was still alive when he was shoved into the fire.”

The couple is survived by two boys and two girls, the eldest son being 7 years old.

Soon after news broke in local media, large police contingents were deployed in the area to prevent further bloodshed.

Punjab Chief Minister Shahbaz Sharif formed a three-member committee to expedite the investigation of the killings and ordered police to beef up security in Christian neighborhoods in the province.

Kasur District Police Officer Capt. Jawad Qamar told Morning Star News on Tuesday that a case had been registered against at least 2,000 “unidentified people” for the murders, and that investigations were continuing. He had also said that police had arrested 48 people.

On Wednesday (Nov. 5), however, Morning Star News obtained a copy of the FIR (No. 475/14) in which the complainant, Assistant Sub-Inspector Muhammad Ali of Chowki Factory Area, Kot Radha Kishan, named 53 suspects, including Gujjar, the owner of the brick kiln – he has been arrested. Also named as suspects were other kiln employees, including Munshi Shakeel, Munshi Afzal, Muhammad Akram, Mehdi Khan, Ramzan and watchman Muhammad Akram, along with hundreds of “unidentified people.”

Capt. Qamar told Reuters news agency on Wednesday that the murders of the Christian couple were incited by the mullah of a local mosque. He also lowered the number of people arrested to 44.

Questionable Prosecution
Police filed a First Information Report (FIR) on its own accord, even though the aggrieved family was determined to file a formal complaint into the killings of their loved ones.

Sources in the Punjab Inspector General of Police office told Morning Star News that the government did not want the family to become the complainant in the case as it would keep media focused on developments and cause “global embarrassment” to the government of Prime Minister Nawaz Sharif, whose three terms in office have been tainted with extreme violence against non-Muslims, particularly Christians.

Capt. Qamar on Tuesday declined to say why police had filed the FIR of its own accord rather than allow the relatives to do so.

All major acts of religious terrorism against Christians, including Joseph Colony arson in March 2013, Gojra carnage in 2009, and previous killings at Shanti Nagar, Khanewal and Bamnianwala, have taken place under Pakistan Muslim League (N) governments, which draw support from banned Islamist extremist outfits based in the southern belt of Punjab Province.

The relative of the deceased and Christian rights advocates criticized the police registration of the FIR and the hasty manner in which the remains were buried without informing the family, allegedly on the counsel of a politician.

“We weren’t even told about the funerals. How can a politician approve the funeral of my [relative] without even seeking my permission?” the source said, adding that the family had decided to challenge the government’s decision to register a case on its own.

Attorney Aneeqa Maria, who will be filing a request in the Lahore High Court for a stay order against the government’s FIR and for a fresh FIR into the case filed by the family, said that the attitude of the government and police showed that they would brush this case under the rug in the same way they did with those accused in the Joseph Colony arson, which destroyed 175 homes, after rumors spread of an alleged remark against Islam by a Christian.

“The police were the complainants in the case – name one accused who has been convicted in the case,” Maria said. “In fact, most of the accused are out on bails, while several others have been acquitted of the charges because of deliberately weakened prosecution. This is what the government wants to do in this case too.”

She vowed not to let the government get away with the “three murders.”

Napolean Qayyum, field officer of the Voice Society and a political worker affiliated with the opposition Pakistan People’s Party, said that the incident had furthered fears in the minority community that any person could simply devastate their lives by playing the “blasphemy card.”

“The frenzied mob did not even consider Shama’s condition and kept raining kicks and batons on her,” he said. “Today three innocent lives were lost – the couple and their unborn child – and the government is responsible for these murders.”

He added that both Muslims and non-Muslims were falling prey to the blasphemy laws but no political party had dared to confront its misuse by people to settle personal vendettas.

Rights groups have said that Pakistan’s blasphemy laws are often misused to persecute minorities and to settle personal scores. In a recent report, Amnesty International said the vague formulation of the blasphemy laws, along with inadequate investigation by authorities and intimidation by mobs and some religious groups, has promoted vigilantism across Pakistan, especially in Punjab Province.

“This type of violence is fueled by Pakistan’s repressive blasphemy laws, which add to the climate of fear for religious minorities,” the organization said in a statement. “In this case, a mob appears to have played judge, jury and executioner.”

The rights group said the climate of impunity around violence against religious minorities in Pakistan is pervasive, and that it is all too rare that those behind attacks are held accountable.

On Oct. 16 a court upheld the death sentence for Aasiya Noreen, commonly known as Asia Bibi, the first woman to be sentenced to death for blasphemy in Pakistan. She was arrested in June 2009 after Muslim co-workers in a berry field 60 miles west of Lahore beat her when she refused to convert to Islam.

“The brutal murder of the Christian couple in Kot Radha Krishan is an unacceptable crime,” the premier stated. “A responsible state cannot tolerate mob rule and public lynching with impunity.”

Sharif directed Punjab Chief Minister Shahbaz Sharif to show no mercy and allow the law to take its course to punish those responsible.

“The Pakistani state has to act proactively to protect its minorities from violence and injustice,” the prime minister said. “We must promote religious and ethnic diversity in our society as a virtue.”