Fire officials thought to have tried to downplay likelihood of arson. 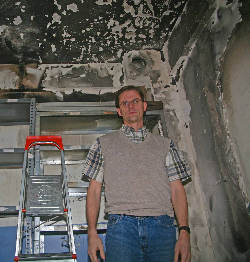 ISTANBUL, Turkey, December 20, 2014 (Morning Star News) – Turkish authorities are searching for a suspected arsonist in connection with a fire here that destroyed thousands of New Testaments and other Christian books.


The fire started at approximately 7 p.m. on Dec. 7 at the offices of the Bible Correspondence Course in Turkey (BCC-Turkey), located in a multistory building that also houses a church in the Kadikoy neighborhood of Istanbul, according to officials of the ministry.

No one was injured in the fire and no structural damage was reported, but according to an initial estimate by BCC-Turkey, some 10,000 religious books were destroyed, many of them New Testaments. Total losses so far are estimated at approximately US$12,500.

Students who live in an apartment on the top floor of the building reported smoke to emergency dispatchers, who sent firefighters to the scene. The fire was put out in minutes, largely due to the fact that it remained contained to one corner of the storage area on the second floor of the building. Kadikoy International Church and the offices of BCC-Turkey, located on the third floor, were untouched.

Paul Weaver, media and IT director at the ministry, said the identity of the attacker is unknown, but his image appears in a security camera video the day of the attack. Of great concern to members of the ministry is that on Monday (Dec. 15), someone of a “suspicious nature,” likely the same man who was seen on the security camera footage, was found searching through the stairwell of the office building. Someone in the building became aware of his presence and chased him down the stairs. Once outside, he escaped.

“I think whoever did it knew something about what happens up here, because they kind of knew to come on a Sunday afternoon, and that if they were going to have an opportunity where there weren’t going to be a lot of people around, that’s probably the one that was most likely,” Weaver said.

He said that although the damage is a serious loss, it could have been much worse.

“I think the firemen were genuinely surprised that when they got there they didn’t find a bigger fire, and I call that providence,” he said. “I don’t know what else to call it because I would agree, I think it should have been a bigger fire than what they actually found.”

“Our hunch is it is people who don’t like people who do the activities we do here – mainly giving out free New Testaments and explaining the Christian faith to people,” he said.

There are numerous groups in Turkey who are opposed to all missionary activity, ranging from hard-core Turkish nationalists to numerous Islamic groups.

Fire department officials initially claimed the fire was accidental and declined to investigate. Based on a damaged Christmas ornament that was found in the ash pile of the burned books, they said the fire was caused by a short circuit in a string of lights on a Christmas tree. But this finding was not in line with the evidence, Byle said, because such a tree never existed.

“My question is, why can’t we find any evidence of electric cables or any legs from a Christmas tree?” he said, “We didn’t have two Christmas trees. We have one, and the one is still sitting on the shelf.”

Byle said fire officials also ignored clear evidence that the fire was of a suspicious nature, such as the door to the storage room being pried open with such force that it warped a heavy bolt lock and couldn’t be closed. The whole bolting mechanism eventually had to be removed. The fire also started in the middle of a stack of New Testaments, where there was no electrical wiring.

Police are now searching for an arsonist based on other evidence, but Byle declined to speak about the nature of that evidence. BCC-Turkey has hired a lawyer to file a complaint against the fire department for failing to conduct an investigation when arson was “such an obvious scenario,” according to Byle.

“We were disappointed by how little interest it seemed was shown by the authorities investigating this,” Byle said. “If a depot in Germany or England located right above a mosque, in the same building full of thousands of Korans, had a fire start right exactly where the Korans were stored, and if the policemen from England or Germany arrived at the scene and took a quick look and said, ‘Oh, well this is obviously just an accident,’ and then just tried to convince all the on-lookers it was an accident and didn’t even bother to call the police in, that man would be out of a job very quickly.”

Weaver said fire officials’ reluctance to investigate was based on an intentional desire to keep the fire from being reporting by local, national and international news outlets. Byle agreed.

“The firefighters, whether intentionally or just non-intentionally, tried very hard to convince everyone that it was just and accident,” he said. “And again, it could be out of a nice desire to, ‘Let’s just not make a big deal about this.’ They could be much more culpable, like they knew there were signs that it could be an arson, but they just tried to cover it up so that it wouldn’t become a big news event.”

BCC-Turkey, known in Turkish as Kutsal Kitap Bilgilendirene Dernegi or “The Holy Book Information Association,” has been an officially recognized association since 2009. Having existed in one form or another since 1961, however, it is one of the oldest evangelical groups in Turkey, Weaver said.

One of the few openly evangelistic Christian organizations in Turkey, it has numerous outreach ministries and distributes about 70 to 120 New Testaments every week. Its Facebook page has more than 56,000 “likes,” no small feat in a Muslim-majority country where Christians are viewed with suspicion and converts can be heavily persecuted.

Kadikoy International Church has been the site of other incidents of harassment or persecution, including an incident in August 2009 when a Turkish nationalist abducted a Turkish convert to Christianity at knifepoint. The attacker held a Turkish flag over İsmail Aydın’s head, accused him of being a “missionary dog” and threatened to slit his throat. After intervention by police, who told Aydın’s attacker that killing him would damage Turkey’s reputation, he released Aydın.

Because Byle, a U.S. citizen, engages in street evangelism, he is probably the most widely known member of BCC-Turkey and is no stranger to legal authorities in Turkey. He has been beaten once and jailed twice for his evangelistic outreaches. Authorities have also tried to deport him or refuse to issue a residency permit several times, on orders, he said, of high-ranking officials in the Interior Ministry

“There have been efforts to deport me and deny me residency permits even though I have not been convicted of committing any crime,” he said.

Morning Star News is a 501(c)(3) non-profit corporation that relies solely on contributions to offer original news reports of persecuted Christians. By providing reliable news on the suffering church, Morning Star News’ mission is to empower those in the free world to help and to encourage persecuted Christians that they are not forgotten or alone. For free subscription or to make tax-deductible donations, contact This email address is being protected from spambots. You need JavaScript enabled to view it., or send check to Morning Star News, 34281 Doheny Park Rd., # 7022, Capistrano Beach, CA 92624, USA.