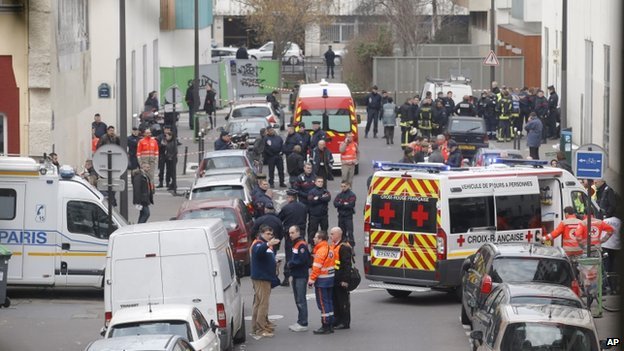 A major police operation is under way to find three gunmen who fled by car.

President Francois Hollande said there was no doubt it had been a terrorist attack "of exceptional barbarity".

It is believed to be the deadliest attack in France since 1961, when right-wingers who wanted to keep Algeria French bombed a train, killing 28 people.

The masked attackers opened fire with assault rifles in the office and exchanged shots with police in the street outside before escaping by car. They later abandoned the car in Rue de Meaux, northern Paris, where they hijacked a second car.

Witnesses said they heard the gunmen shouting "We have avenged the Prophet Muhammad" and "God is Great" in Arabic ("Allahu Akbar").

The number of attackers was initially reported to be two, but French Interior Minister Bernard Cazeneuve later said security services were hunting three "criminals". He said that Paris had been placed on the highest alert.

Charlie Hebdo editor Stephane Charbonnier, 47, had received death threats in the past and was living under police protection.

French media have named the three other cartoonists killed in the attack as Cabu, Tignous and Wolinski, as well as Charlie Hebdo contributor and French economist Bernard Maris.

The attack took place during the magazine's daily editorial meeting.

At least four people were critically wounded in the attack.

The satirical weekly has courted controversy in the past with its irreverent take on news and current affairs. It was firebombed in November 2011 a day after it carried a caricature of the Prophet Muhammad.

The latest tweet on Charlie Hebdo's account was a cartoon of the Islamic State militant group leader, Abu Bakr al-Baghdadi.

Charlie Hebdo's website, which went offline during the attack, is showing the single image of "Je suis Charlie" ("I am Charlie) on a black banner, referring to a hashtag that is trending on Twitter in solidarity with the victims.

French government officials are holding an emergency meeting, and President Hollande is due to give a televised address later.People had been "murdered in a cowardly manner", President Hollande told reporters at the scene. "We are threatened because we are a country of liberty," he added, appealing for national unity. 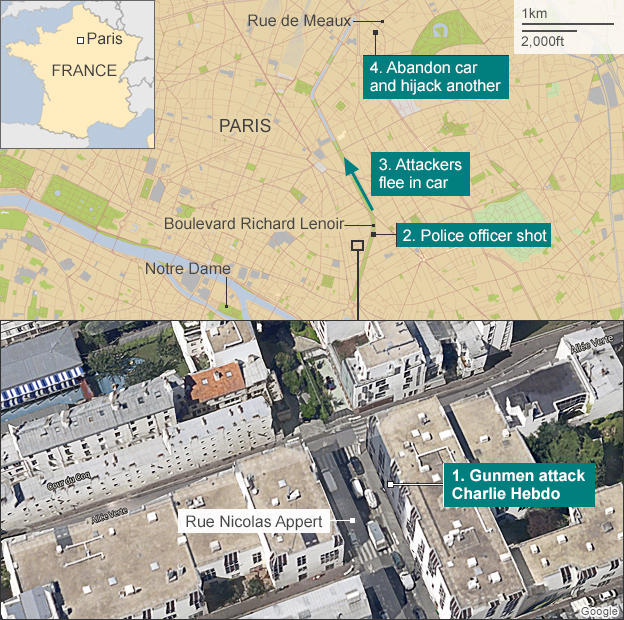 US President Barack Obama has condemned the "horrific shooting", offering to provide any assistance needed "to help bring these terrorists to justice".

UN Secretary General Ban Ki-moon said: "It was a horrendous, unjustifiable and cold-blooded crime. It was also a direct assault on a cornerstone of democracy, on the media and on freedom of expression."

UK Prime Minister David Cameron said in a tweet: "The murders in Paris are sickening. We stand with the French people in the fight against terror and defending the freedom of the press."

Charlie Hebdo is part of a venerable tradition in French journalism going back to the scandal sheets that denounced Marie-Antoinette in the run-up to the French Revolution.

The tradition combines left-wing radicalism with a provocative scurrility that often borders on the obscene. Its decision to mock the Prophet Muhammad in 2011 was entirely consistent with its historic raison d'etre.

The paper has never sold in enormous numbers - and for 10 years from 1981, it ceased publication for lack of resources.

But with its garish front-page cartoons and incendiary headlines, it is an unmissable staple of newspaper kiosks and railway station booksellers. 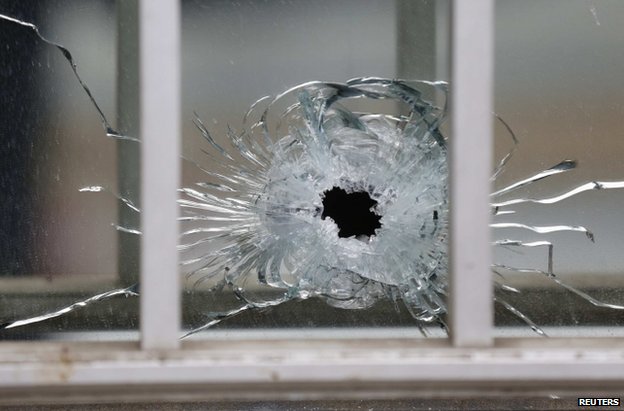 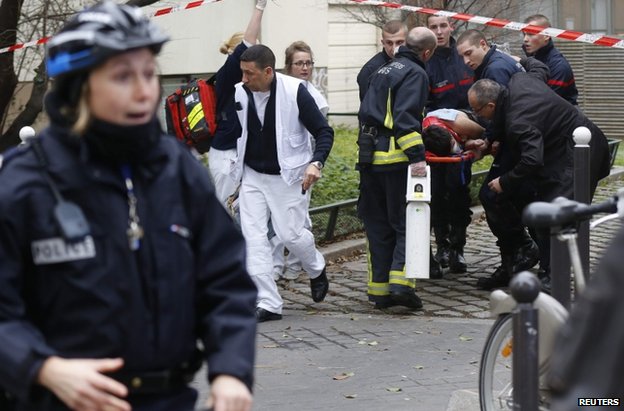 Footage shot by an eyewitness outside the magazine's office shows two armed men dressed in black approach a wounded police officer lying on a pavement. One of the men shoots the officer in the head, before both men are seen running back towards a black vehicle and driving away.

Large numbers of police and rescue services rushed to the scene 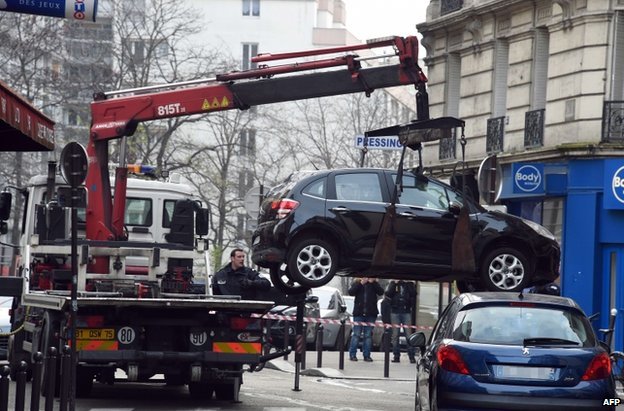 The attackers switched cars after fleeing the scene

Gilles Boulanger, who works in the same building as the office, told French TV channel Itele: "There were several shots heard in the building from automatic weapons firing in all directions. So then we looked out of the window and saw the shooting was on Boulevard Richard-Lenoir, with the police. It was really upsetting. You'd think it was a war zone."

French President Francois Hollande: "This is an act of exceptional barbarism"

Wandrille Lanos, a TV reporter who works across the road, was one of the first people to enter the Charlie Hebdo office after the attack.

"As we progressed into the office, we saw that the number of casualties was very high. There was a lot of people dead on the floor, and there was blood everywhere," he told the BBC.

After the attack, which occurred at about 10:30 GMT, police warned French media outlets to be on alert and pay attention to security.

The country was already on the alert for Islamist militant attacks after several incidents just before Christmas.

Cars were driven at shoppers in two cities, Dijon and Nantes, and police were attacked by a man wielding a knife in Tours.

While the French government denied the attacks were linked, it announced plans to further raise security in public spaces, including the deployment of about 300 soldiers.

Danish newspaper Jyllands-Posten, which published cartoons of the Prophet Muhammad in 2005 sparking riots in Muslim countries, says it has stepped up security in the wake of the Charlie Hebdo attack.