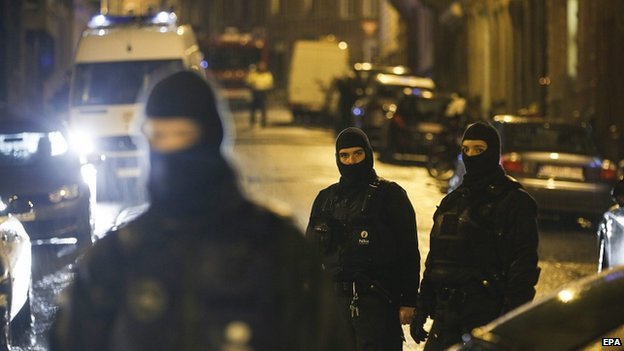 Two suspected jihadists have been killed in an anti-terror operation in eastern Belgium, officials say.

A third person had been arrested in the raid in Verviers and weapons are reported to have been recovered.

Prosecutor Eric Van Der Sypt told reporters police had targeted a group returning from Syria who had been about to launch attacks in a matter of hours.

Suspects had opened fire on police, he said. There were also overnight searches in the Brussels area.

Speaking after Thursday's raids in Verviers, Mr Van Der Sypt said: "The suspects immediately and for several minutes opened fire with military weaponry and handguns on the special units of the federal police before they were neutralised."

After the raid, four Kalashnikovs, bomb-making equipment and police clothing were found, according to local media. Security forces remain in the Verviers area.

Belgian officials say more than 300 people have left Belgium to fight with Islamic militant groups in Syria and Iraq.

Belgian journalist Mark Eeckhaut told the BBC the suspects in Verviers had wanted to attack a police station and cause a large number of casualties.

The centre of Verviers was sealed off by heavily armed police

Forensic experts combed the scene of the raid

News of the anti-terrorist operation has shocked Belgium

The terror threat level in Belgium has been raised to three - the second highest, Mr Van Der Sypt said.

Witness Marylou Fletcher told the BBC: "We were going back from shopping and saw the police cars. We thought there was an accident then we heard something blowing up. There were a lot of gunshots.

"My children cried. They are just terrified."

The area around the train station has been cordoned off and reports on social media say there is a heavy police presence in the town centre.

British Prime Minister David Cameron said events in Belgium "look like yet another indication of the huge risk we face from Islamist extremist terror in Europe". 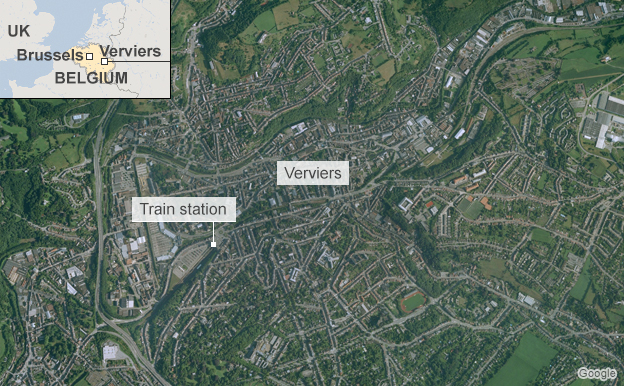 "We have to remain extremely vigilant, we have to take all the steps we can to beat this evil," he told reporters in Washington where he is to hold talks with President Barack Obama.

Verviers is in the province of Liege, close to the German border, and has a population of about 56,000.

The incident comes a week after attacks in neighbouring France that killed 17 people. Belgian media has reported that some of the weapons used in those attacks were bought in Brussels.

Mr Van Der Sypt said no weapons link with the killings in France had been established.

However there are fears that the suspects captured or killed in this operation could have been inspired by the killings in France to accelerate their own plans, the BBC's Chris Morris in Verviers says.

The attacks in and around Paris - on satirical newspaper Charlie Hebdo, a kosher market and police - have heightened security fears in several European countries.

In May last year, four people were killed inside the Jewish museum in Brussels. A Frenchman of Algerian descent is in custody in Belgium over the attack.