By Steve Holland and Roberta Rampton 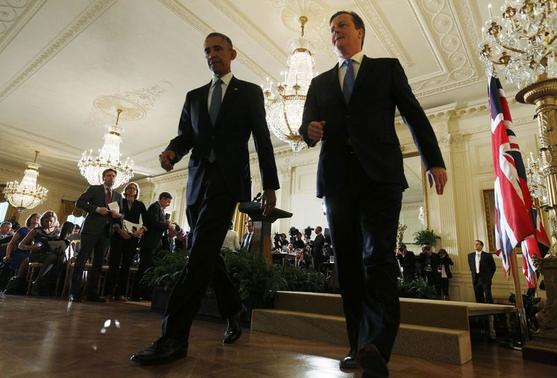 Obama and Cameron held two days of White House talks amid increasing concern in Europe about the threat posed by extremists after 17 people were killed in Paris attacks and Belgian authorities engaged in a firefight with terror suspects.

"We face a poisonous and fanatical ideology that wants to pervert one of the world's major religions, Islam, and create conflict, terror and death. With our allies, we will confront it wherever it appears," Cameron told a joint White House news conference with Obama after their talks.

Obama said he and Cameron accepted that intelligence and military force alone would not solve the problem, and they would work together on "strategies to counter violent extremism that radicalizes recruits and mobilizes people, especially young people, to engage in terrorism."

The extremists' ability to communicate online and spread recruitment propaganda on the Internet have presented a challenge to authorities.

Obama and Cameron expressed concerns about new encryption products that could prevent governments from tracking extremists poised to attack.

"We're not asking for back doors" to access electronic communications, Cameron said. "We believe in very clear front doors through legal processes that should help to keep our country safe."

Obama said debate from civil libertarians and privacy groups has been "useful" in the debate, but said legal safeguards are in place to prevent government from "Big Brother" scenarios.

Obama said the U.S. government has been working with technology companies to deal with privacy concerns without preventing investigations.

"Social media and the Internet is the primary way in which these terrorist organizations are communicating," Obama said.

"We're still going to have to find ways to make sure that if an Al Qaeda affiliate is operating in Great Britain or in the United States, that we can try to prevent real tragedy," he said.

Obama and Cameron also agreed to conduct cybersecurity war games and establish a joint "cyber cell" to prepare for and share intelligence on malicious hacking, weeks after Sony Entertainment was hacked in an incident the FBI has blamed on North Korea.