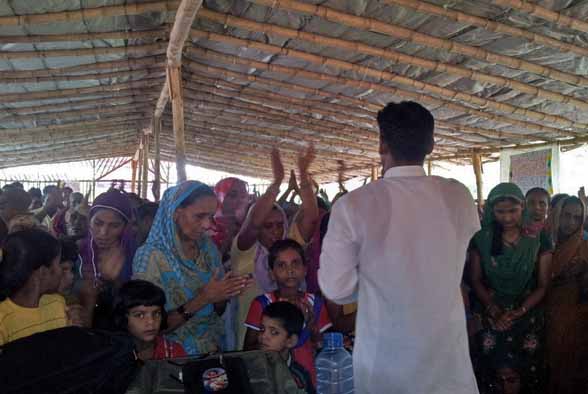 Pastor Daniel Singh of Salvation for Asia Church in Swar, near Rampur, told Morning Star News his two-year lease of the land allowed him to build a worship site, but Hindu extremists in the northern state have been threatening to burn his church building if he does not leave the property.

“The extremists summoned me one night to one of their meetings, and they threatened to burn up the church if we do not empty the land,” Pastor Singh said. “The BJP [Bharatiya Janata Party] district president also threatened to terminate the job of one church member if he continues to come to our worship meetings.”

Local officials kept the church from its Good Friday services after the Hindu extremists submitted a complaint against the pastor of “forceful conversion” to police and warned him to vacate the property.

On Wednesday (April 8), the Rampur District magistrate ordered the pastor to immediately vacate the land, where about 1,000 people regularly worship.

“We have rented land to build a structure for conducting worship meetings, and we have two more years to conduct worship services according to the lease deed we made with the landlord,” Pastor Singh said. “However, pressured by the Hindu extremists, the government official along with the landlord are telling us to vacate the land as soon as possible.”

Hindu extremists first objected to worship services on March 28, when they accused the pastor and other church members of forceful conversion. Uttar Pradesh does not have an “anti-conversion” law, routinely used by Hindu extremists in more than five other states to harass Christians with false charges of forcible or fraudulently conversion.

While not governed by the Hindu nationalist BJP, Uttar Pradesh has seen a high number of anti-Christian incidents since the federal election of Prime Minister Narendra Modi, whose governing alliance is headed by the BJP. In the first 10 months since Modi took power in May 2014, there were 22 cases of violence against Christians in the state, compared with three such incidents in the prior 10 months, according to the Evangelical Fellowship of India (EFI).

Also in Uttar Pradesh, about 30 Hindu extremists in Maharajganj, Rae Bareilly, on March 25 stormed a prayer meeting at the home of the Rev. Manoj Samuel and pushed, kicked, punched and strangled participants while cursing at them and accusing them of forcible conversion, he said.

“They broke the wall of the hut and stormed in, accused me of giving money to people to make them follow Jesus and mercilessly attacked us,” Pastor Samuel told Morning Star News. “Four Christians, including three women, were rushed to the hospital for treatment. They sustained injuries on their heads, backs and legs, and they complained of internal pain as well.”

Church leaders maintained that there was no instance of forceful or fraudulent conversion.

Also on March 25 in Agra, about 20 Hindu extremists barged into a Lent prayer meeting at the Light Worship Centre, verbally abused the Christians and beat them, according to the EFI. As the mob grew more furious, police took 10 people to the police station, including three women and a girl, as a preventative measure.

The Rev. Dr. Raju Thomas, general secretary of the National Christian Federation, told Morning Star News that the group had filed a police complaint and submitted a memorandum to the chief minister, but that no action has been taken.

“There is a feeling of insecurity among the Christian community with the frequent occurrence of physical attacks against the churches and the Christians, the ‘homecoming’ programs and the hate speech and campaigns by the top leaders of the Sangh Parivar and ministers of the BJP almost on a daily basis,” Dass told Morning Star News. “We have submitted a letter to the state minority commission addressing these issues.”

Last year there was only one incident in Uttar Pradesh until May. After the BJP-led alliance obtained central government power on May 26, the state witnessed 18 incidents against Christians, according to the EFI.

The jump in cases of violence against the Christians, and the Ghar Vapsi (“homecoming”) programs by Hindu nationalist groups, are a clear indication of attempts to polarize voters along communal lines ahead of state elections in 2017, human rights leader Dr. John Dayal told Morning Star News.

“Uttar Pradesh has been a particular focus of the BJP and its strong arms, the Rashtriya Swayamsevak Sangh, World Hindu Council and the Bajrang Dal, and the BJP is working aggressively towards winning the 2017 state legislative assembly poll,” Dayal said. “Electoral victory will result in having a majority in the upper house of Parliament in New Delhi, and this will enable them to make any constitutional changes they like, such as a national law against conversion or against beef.”

As the most populated state in the country with more than 166 million people, Uttar Pradesh has the most seats, 80, in the lower house of Parliament. Election outcomes in the state thus have a significant influence on the formation of a central government.

The Uttar Pradesh Minority Commission earlier this year held “conspiracy of the BJP” as one of causes of “reconversion” programs in the state, under which Christians and Muslims were “encouraged,” with various threats and monetary incentives, to “return” to Hinduism, though most were never Hindus in the first place.

Commission Chairman Shakil Ahmad said at a press conference that local intelligence had failed to gather timely information about the “reconversion” events.

“The team, during its probe, found conspiracy of the BJP and failure of intelligence responsible for the conversion row,” reported Daily News and Analysis newspaper.

The state’s ruling Samajwadi Party leaders said the BJP wanted to stir communal tensions to gain political mileage. In a scathing attack on the BJP, Uttar Pradesh Chief Minister Akhilesh Yadav yesterday (April 9) was reported to have accused it of misleading people and fanning sectarian conflict.

The Catholic Bishops Conference of India has sought Prime Minister Modi’s urgent intervention to end the “anxieties of the Christian community” over “reconversion” attempts and the “saffronization of education,” an attempt to overhaul school curriculum according to Hindu nationalist sentiments that threaten the secular basis of the country.

If you would like to help persecuted Christians, visit http://morningstarnews.org/resources/aid-agencies/ for a list of organizations that that can orient you on how to get involved.