Archbishop Welby in 'visit of condolence' for murdered Egyptian Christians

Media captionArchbishop of Canterbury Justin Welby: ''Europe as a whole must rise up, and seek to do what is right''

Archbishop of Canterbury Justin Welby has travelled to Egypt for a "visit of condolence" following the murders of 21 Egyptian Coptic Christians in Libya.

The group of migrant workers werekidnapped and beheaded by Islamic State (IS) militantsin February.

The archbishop will be meeting religious and political leaders leaders on his visit, including the Coptic Christian Pope and the Grand Imam.

He has called for more support for Christians facing persecution.

His comments came asIS released another video, purportedly showing the killing of up to 30 Ethiopian Christians in Libya.

Mr Sisi has publicly supported the Coptic Christian communities in his country.

In his Easter message, the archbishop highlighted the persecution of Christians in the Middle East and Africa, including the 148 victims of a Kenyan university attack earlier this month.

He said those living in peaceful societies should "stand as witness" to what was happening to Christians elsewhere.

BBC chief international correspondent Lyse Doucet said the archbishop had warned that the treatment of Christians was the worst it had been since the 13th Century.

He had backed military action against Islamic State fighters in Iraq but also made it clear their appeal to young Muslims in many places, including Britain, had to be tackled in other ways, our correspondent added. 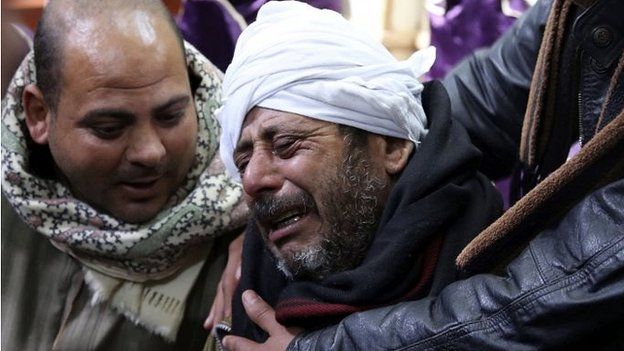