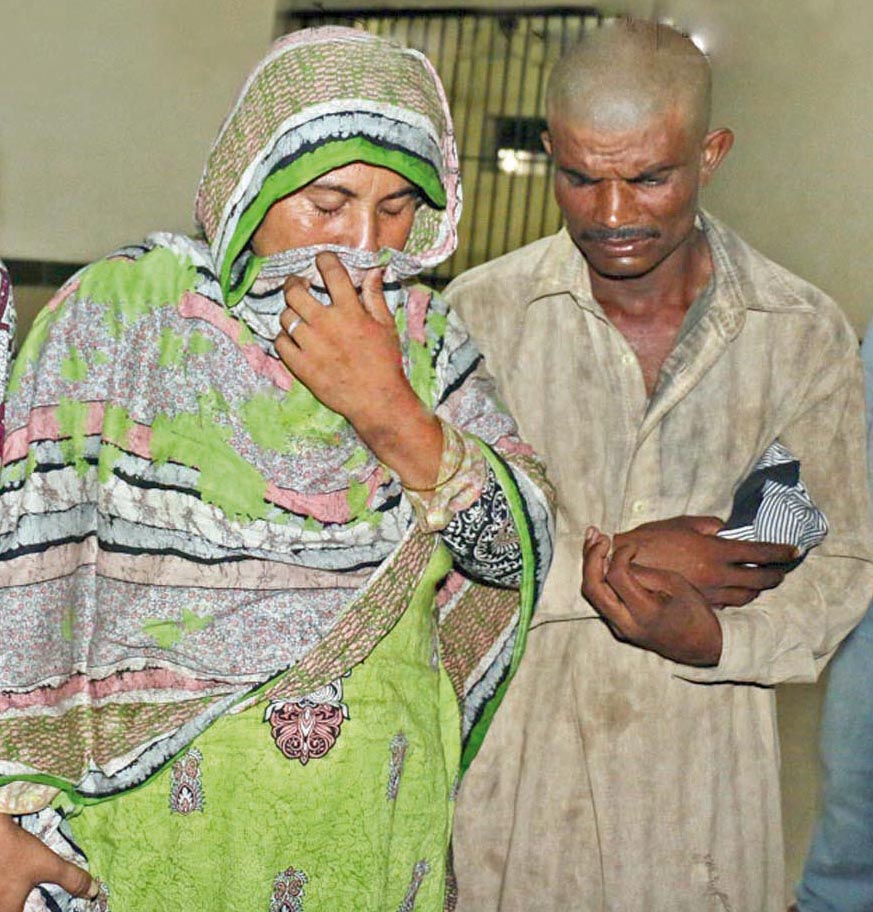 LAHORE, Pakistan, July 5, 2015 (Morning Star News) – In a rare move by Pakistani police, an Islamist cleric was taken into custody on Friday (July 3) for inciting a Muslim mob to try to kill a Christian couple for alleged desecration of the Koran, a police official said.

Area residents and rights activists told Morning Star News that hundreds of Muslims in Makki village, near Farooqabad in Sheikhupura District, on Tuesday (June 30) attacked Owais Qamar, 35, and his wife Rukhsana after a neighbor complained that they were sleeping on a salvaged advertising sign inscribed with a koranic verse.

The frenzied mob beat Qamar, a father of four, shaved his head and dragged him through village streets. Rukhsana and two other women of the family were also tortured and their faces blackened with dirt before police rescued them. Such police intervention is relatively unusual in Pakistan, where mobs furious over alleged blasphemy are often left to wreak havoc.

The area sources said Islamic leaders made announcements from the local village mosque that Qamar had desecrated the Koran by using as an in-home mat an advertising sign that contained emblems of various colleges and a short koranic verse related to education. They said that as soon as Qamar, his wife, their daughter Farzana and Qamar’s sister-in-law were brought to the village center, the mob pounced on them, blackened their faces and shaved Qamar’s head.

“Qamar was thrashed by men while his female family members were beaten up by the Muslim women,” said a Christian villager. “The mob later put a garland made up of shoes around Qamar’s neck and dragged him in the village streets.”

The neighbor added that they immediately called police, fearing the violence could get worse and put the lives of the family in jeopardy.

Sheikhupura Senior Superintendent of Police Sohail Zafar Chattha played a pivotal role in rescuing the impoverished Christian family from the mob, which the police chief said was bent on killing them without first learning the facts of the case. Chattha told Morning Star News that he had ordered officers to save the couple even if it meant opening fire at the Muslim mob.

“The clerics leading the mob demanded that police arrest the couple and charge them with blasphemy,” he said. “I told them that I would not register a case because no blasphemy has been committed.”

Instead, he ordered registration of a case against the clerics and 400 others for inciting violence and endangering the lives of the Christian couple, he said.

“The mob wanted to kill them right there, all because they are poor, illiterate people who didn’t realize that a line from the Koran was written” on the sign, he said.

He said that one of the clerics who led the mob and fled the village after the police action was arrested on Friday (July 3). The cleric’s name has not been released.

“We are looking for a barber who ignited the whole issue,” he added.

The police chief said that the couple had been handed over to Christian elders, and that he had advised them not to return to the village as it could endanger their lives.

Blasphemy is punishable by death in Pakistan. The charge is hard to fight because the law does not define clearly what is considered blasphemous. Even presenting the evidence in court can sometimes itself be considered a fresh infringement.

Last year, a British man with a history of mental health illness was sentenced to death for blasphemy in Pakistan. The same year, a court upheld a death sentence for blasphemy for a Christian woman, Aasiya Noreen (commonly known as Asia Bibi), in a case that drew global headlines after the assassination of two prominent politicians who took up her cause.

Minorities in Pakistan complain that the state fails to protect them from violence. Last year, a policeman hacked a man to death for allegedly making derogatory remarks about the companions of the Muhammad, the prophet if Islam. Days earlier, a mob beat a Christian couple to death and burned their bodies in a brick kiln in Kot Radha Kishan.

If you would like to help persecuted Christians, visit http://morningstarnews.org/resources/aid-agencies/ for a list of organizations that that can orient you on how to get involved.

Morning Star News is a 501(c)(3) non-profit corporation that relies solely on contributions to offer original news reports of persecuted Christians. By providing reliable news on the suffering church, Morning Star News’ mission is to empower those in the free world to help and to encourage persecuted Christians that they are not forgotten or alone. For free subscription or to make tax-deductible donations, contact This email address is being protected from spambots. You need JavaScript enabled to view it., or send check to Morning Star News, 34281 Doheny Park Rd., # 7022, Capistrano Beach, CA 92624, USA