One of us: the militant Egypt's army fears most 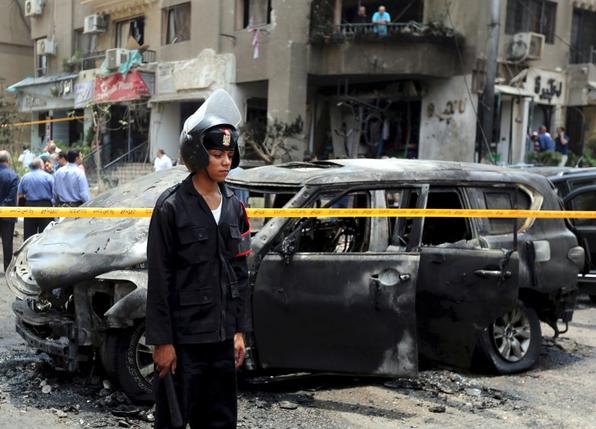 Policemen investigate the scene of a car bomb attack on the convoy of Egyptian public prosecutor Hisham Barakat near his house at Heliopolis district in Cairo, Egypt, in this June 29, 2015 file photo.

CAIRO, As a special forces officer in the Egyptian Army, Hisham al-Ashmawy trained in the desert, learning camouflage and survival techniques and how to hunt the enemy in rough terrain. Now he has turned militant, and uses that training to another purpose: helping fellow jihadists fight Egypt’s government.

Ashmawy’s background makes him a potent figure among Islamist fighters, who President Abdel Fattah al-Sisi say pose an existential threat to Egypt. “Ashmawy is the most dangerous terrorist we face,” an Egyptian National Security official told Reuters. “He is the mastermind and executor.”

Security officials say the former military man, whose allegiance has switched from Islamic State to Al Qaeda, has carried out some of the most high-profile attacks in Egypt. These include the attempted assassination of former Interior Minister Mohamed Ibrahim in May 2013, and the killing in June this year of Egypt's top public prosecutor in a car bomb.

As Egypt heads to parliamentary elections on Oct. 18, Ashmawy's story illustrates the complexities of the security challenge facing the country. Egypt has struggled with Islamist sympathizers in the military since 1981, when army officers assassinated President Anwar Sadat. Today the government, run by a former military man, hopes the elections will help bring stability. People like Ashmawy challenge that.

Ashmawy has spent the past decade using what he knows about the security forces against them. He moved to the Libyan town of Derna, a hotbed of Islamist radicalism near the border with Egypt, about a year ago, arriving in a truck surrounded by gunmen, according to local resident Ehab Senousi.

In Derna, out of reach of Egyptian law enforcement, he runs an Al Qaeda cell, say several Egyptian security officials. So far, despite the toughest crackdown on militancy in the country's history, he has managed to evade capture. His path from the military to Egypt’s most wanted man – described by former colleagues, relatives and Egyptian security officials – shows that many of the country's problems are homemade.

A senior military officer in the Sinai, where Ashmawy joined Islamic State's Egypt affiliate, said: "We are not intimidated by any of them - neither Ashmawy or anyone else ... He will fall soon.

"The problem is he is outside the country, specifically in Libya, and this makes it more difficult to arrest him. We are on the right path. We need a little bit of time to eliminate terrorism in Egypt."

Born in 1978, Ashmawy is a fitness fanatic whose political views were slow to emerge, according to relatives. He joined a special forces unit called Sa'aika (Thunderbolt) in 1996, giving no sign of opposition to then President Hosni Mubarak, said relatives and associates.

"He used to cheer soccer teams with us on television. He was not extreme in any way," said an army officer who knew him. "He was a good soccer player."

After about a year, Ashmawy started to become more pious, people who knew him said. He was caught handing out Islamist literature and pamphlets to other officers. Saeed Ismail, a former army officer who knew Ashmawy for nearly two years, said Ashmawy was punished but still organized gatherings after morning prayers.

"He talked with us about the need to have our own personalities and not to accept orders without being convinced of them," said Ismail.

Ashmawy began to fast regularly and would often criticize the government. One day, Ismail recalls, Ashmawy yelled at two conscripts, "Victory will only come through force."

After four years in Thunderbolt, Ashmawy was transferred to an administrative post where the authorities thought he would be less of a threat. But he met other officers, discussed political Islam, and kept handing out banned books.

Relatives say a tipping point came in 2006. A close friend of Ashmawy's was detained by state security agents, they say, adding that they believe the man was tortured and died in custody. After that, they noticed a sharp shift in Ashmawy's temperament.

"Before this incident he was religious like any other Egyptian but he did not hate the men from state security or the army and he had many friends in the police," said his nephew, Osama Mohamed, who said he was close to his uncle. "After this incident he cut all of them off except for two."

In 2007, a military court expelled Ashmawy from the army. He started an import-export business in Cairo, trading clothes and auto parts. And he kept on meeting other former military officers in a mosque beneath his father's apartment.

In the chaos that ended three decades of rule by Mubarak in 2011, Ashmawy dropped off the radar of military intelligence, security officials said.

Islamist President Mohamed Mursi took over. When Sisi toppled Mursi in 2013, militants based in the Sinai launched an insurgency. In particular, fighters with a group called Ansar Beyt al-Maqdis stepped up attacks on Egyptian soldiers and police.

Ashmawy had joined Ansar in 2012. A year later, he emerged as a key operative, according to security officials, heading a cell that taught fighters how to carry out suicide bombing missions, assemble roadside bombs and shoot soldiers.

In 2013, one week after the former interior minister survived an assassination attempt, security forces raided Ashmawy's house. Instead of Ashmawy, they found extensive exercise equipment including climbing ropes hanging from a ceiling.

Police also raided the gym in Cairo where Ashmawy used to work out for three hours every Friday.

"He never spoke with anyone else,” the gym manager said. “When the call to prayer came he prayed inside the gym. He didn't like to talk about politics."

One Egyptian security official tracking Ashmawy told Reuters Ashmawy is highly effective because he knows how the security and military officers who are after him think. "He has managed to make daring escapes when we had him surrounded."

In late 2013, security officials surrounded Ashmawy and other militants for 24 hours in a desert area near Ain al-Sukhna near the Red Sea. Five men were shot dead, but Ashmawy and one other escaped, according to the officials.

"How this happened I don't know," said a special forces officer. The security official tracking Ashmawy said he had deep knowledge of desert escape routes and checkpoints. Sometimes he dresses like a Bedouin; other times in a cap and jeans.

In July this year, the security forces may have come closer than ever to capturing Ashmawy when he led a machinegun and rocket-propelled grenade attack on a checkpoint on the Farafra Oasis Road near Libya that killed 22 border guards.

Ashmawy was wounded, they say. But he got away.

It was then that Ashmawy headed to Libya, taking advantage of the chaos that has gripped the country since Muammar Gaddafi fell.

It is difficult for Egypt to track him in Libya. Though Egyptian jets bombed Islamic State targets in Derna in February, the military is hesitant about seeking out Ashmawy in a neighboring country. There is scant intelligence to go on, say several security officials.

In November 2014, Ashwamy’s Sinai-based militant group pledged allegiance to Islamic State. Ashwamy split with them, security sources believe. He has been joined in Derna by three former army officers and two ex-policemen, they say.

In July this year, security officials recognized Ashmawy’s voice in an audio message that condemned Sisi and called for a holy war against his government.

"All of you must come together to confront your enemy,” said the message, carried by U.S.-based monitoring group SITE. “Do not fear them,” Ashmawy said, “but fear Allah if you are truly believers."