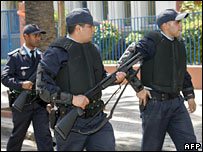 Two suicide bombers have blown themselves up in the Moroccan city of Casablanca, officials say.

One woman passer-by was injured in the blasts, which happened near the US consulate and its cultural centre.

The incident came four days after three people blew themselves up and a fourth was shot dead during a police raid on suspected militants in the city.

The men were wanted in connection with a 11 March bombing at an internet cafe in Casablanca.

Hours after the two men blew themselves up, police arrested the leader and deputy leader of a group behind the 11 March attack and the ones earlier this week, security sources and local media said.

They did not identify the men arrested.

The two bombers - identified by police as brothers - blew themselves up in Boulevard Moulay Youssef in the city's central district.

One of the two bombers asked a policeman for access to the American cultural centre and when questioned further the pair blew themselves up, security officials told the French news agency AFP.

"I saw a man talking to a policeman, trying to distract him I guess, while another man walked by to the consulate and blew himself up over there," a passer-by said.

Police arrested three people after the bombings and found another explosives belt, officials and police said.

An interior ministry official told the Associated Press news agency that the belt linked the brothers with the men who blew themselves up on Tuesday - as they were confronted by Moroccan police in a Casablanca suburb. A fourth suspected militant was shot and one policemen was killed in one of the blasts.

The BBC's Richard Hamilton in Rabat said Moroccan police have been searching for members of an alleged terrorist cell that was planning what they say was a massive bombing campaign against tourist resorts and foreign-owned ships.

It follows last month's bombing when the alleged ringleader of the group killed himself in an internet cafe in the city, our correspondent says.

The Moroccan authorities last week played down the possibility of a link between the latest incidents in Casablanca and the blasts in Algiers.